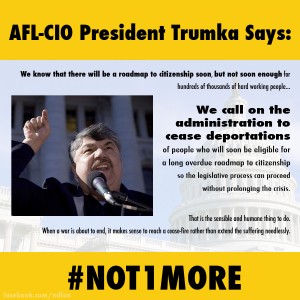 The bill introduced today is another step toward addressing a real crisis. The United States urgently needs a roadmap to citizenship for more than 11 million aspiring Americans. And while Washington, D.C., is full of legislative unveilings that dissolve into recriminations and unsolved problems, this time actually is different. Our cause is unstoppable. There will be a roadmap to citizenship in 2013.

As is to be expected in an 844-page first response to an issue as complex as immigration, there are several details in the bill that cause unintended, but serious, harm to immigrant workers and the broader labor market. We will work to correct those problems now that a bill is before the Senate Judiciary Committee.

We also want to emphasize that while we are making progress in Washington, there is an accelerating crisis of deportations in America. It isn’t a crisis when violent criminals or drug dealers are deported after due process, that’s common sense. But it is a crisis when workers who stand up for themselves in the workplace are deported after employers decide immigrant workers no longer know their place. It is a crisis when DREAMers are separated needlessly from their parents by deportation.

We know that there will be a roadmap to citizenship soon, but not soon enough for hundreds of thousands of hard working people and immigrant communities. We call on the administration to cease deportations of people who will soon be eligible for a long overdue roadmap to citizenship so the legislative process can proceed without prolonging the crisis.  That is the sensible and humane thing to do.  When a war is about to end, it makes sense to reach a cease-fire rather than extend the suffering needlessly.

Our role is to make sure that roadmap leads to citizenship achievable not only in theory but in fact.  Workers care for the elderly, mow our lawns or drive our taxis, work hard and deserve a reliable roadmap to citizenship. And so the labor movement’s entire grassroots structure will be mobilized throughout this process and across this country to make sure the roadmap is inclusive.

The labor movement’s role in the coming months is clear: continue to mobilize on behalf of not only an immigration reform bill, but a bill as compassionate and constructive as our country deserves. And so we will dedicate presidential campaign style resources to ensuring that all workers have a place on the roadmap to citizenship, to reuniting families, and establishing long overdue worker protections.

Along with our allies in the broad-based immigrant rights movement and in communities across the country, the labor movement says that the time for citizenship is now.