A rally against deportations in Fresno has turned into a civil disobedience with  6 people locking themselves on top of ladders blocking the transportation of immigrants to a nearby detention center.

Just before Christmas, 100 immigrant youth and their families are shutting down Fresno’s County Jail, demanding Sheriff Mims to immediately cease all collaboration with ICE.

“The Central Valley is home to thousands of immigrant families, documented and undocumented like mine, and today we demand to stop the deportations of all undocumented people now,” shared Brisa Cruz, a participant of the action.

Another participant, Luis Ojeda states, “Sheriff Mim’s collaboration with ICE breaks apart our families and uses county funds to needlessly put them behind bars. We demand she recognize that our families belong together. It’s police and ICE that should be separated.”

Today’s action is part of the #not1more national campaign to pressure President Obama to halt all deportations and grant administrative relief to all 11 million undocumented people now. The Obama administration is on track to deport a staggering 2 million individuals by the end of the year. Millions of immigrant families are forced to spend the holiday seasons without their loved ones this and previous years. We demand that Sheriff Mims cease all collaboration with ICE immediately.

The protest today ended when the Sheriff’s office announced it was closing for the rest of the day and issued a public statement committing to honor the TRUST Act (AB4) limiting its submission to ICE hold requests and protecting many Fresno families from being turned over to ICE. 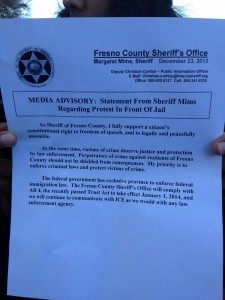 New Report: The Criminal Alien Removal Initiative In New Orleans
Noe Should be Considered Low Priority and be allowed to stay with his 3-year old daughter
Comments
Search the Blog
Video: Accompany the Struggle to Say No More Deportations
Click to Stop their Deportations