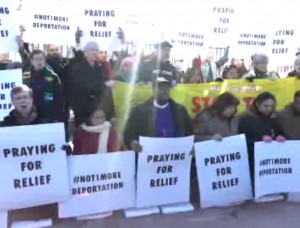 February 17, 2014 – Washington, DC: On Presidents Day, some two dozen religious leaders, immigrants and supporters are being arrested while praying in front of the White House. They gather to protest an inhumane deportation policy that could become President Obama’s historical legacy. The Obama Administration is about to reach an unprecedented 2 million deportations under its immigration quota programs.

The action includes Pilar Molina whose husband is on hunger strike at a detention center in Norristown, Pennsylvania and Hermina Gallegos from Phoenix, Arizona where families and detainees are refusing to eat until their loved ones are released from extended detention.

Their individual cases highlight the urgent need for the President to take immediate action and stop record deportations.. While it is undisputed is that the President has the legal authority to expand the deferred action for childhood arrivals program and suspend deportations, he has chosen not to do so thus far. Recent polls show the majority of Americans believe that the government’s main focus should include the undocumented, not deport them.

Earlier this year, Nearly 5,000 people of faith have signed a petition to the President urging him to take action that reads in part,“In all our faith traditions we are taught to love our neighbor. Please use your authority to suspend deportations while Congress seeks immigration reform. We believe you have the moral responsibility to do what is in your power to keep families together and reduce the suffering caused by unjust deportation.”

Statements from participants are below:

Bishop Minerva Carcaño: “We are willing to be arrested in front of the White House to tell the President that compassion on immigration starts with the stroke of his pen.  We know that the consequences will be minor for us compared to the grave reality undocumented people live with on a constant basis. Far too many broken families are being ripped apart by the injustice of our broken immigration system; a system that President Obama can begin to repair by turning his own policies around before he reaches the milestone of two million deportations. We’ll be praying that he does so.”

Hermina Gallegos and her family, including her daughter Rosy and her sister Margarita, left Mesa for Mexico when Hermina’s father was given one month to live. Hermina couldn’t abandon her father on his death bed. But in Mexico, the family faced violence and persecution, the reason they left in the first place. Returning across the border, Rosy and Margarita were detained. Rosy, a 20-year old DREAMer, is now in Eloy Detention Center, where lawyers say she could be for years. Hermina can’t wait that long. “I’m fasting for my daughter because she has been in detention for over 5 months. My daughter is sick and she is not getting the proper treatment she needs. I am fasting because every day that my daughter is in detention is a day that her health is in danger, if I don’t do anything she can die.”

Gerardo Torres, Undocumented Arizonan, member of Puente Arizona
In Arizona, deportations have our community in a crisis that the President could resolve immediately.  Today, families divided by detention are going on hunger strike until they’re reunited.  We hope the President listens and leads by example.  He has to choose his side on history; whether he’ll be a reformer or the deporter-in-chief.

Harriett Jane Olson, General Secretary, United Methodist Women
This administration comes to its work in a hard time.  Entrenched partisanship in the legislature, corporations and wealthy persons bankrolling “studies” that taint the discussion, craven media acting as an echo-chamber for corporate bosses, and unprosecuted criminal undermining of the economy have created a nation at odds with itself and increasingly isolated from the world community.  The administration is still responsible for its own actions.

To pursue the most extreme detention and deportation policy of any U.S. Administration has not earned the Obama Administration any “street cred” with the opposition.  All it has done is amp up the drumbeat of fear for persons who are already living and working in the US, and for everyone else in their families, churches and communities.

Patrick Carolan, Executive Director, Franciscan Action Network
Our faith is just empty words if not translated into action and sacrifice. My reason for civil disobedience starts with a very simple answer:  it is one way I practice my faith, just as Jesus and St Francis did. We need to rewrite our story to one of connectedness not separateness. As people of faith we have to have a story where people are not undocumented immigrants, where families are separated; but rather a story where we are all brothers and sisters, all part of the one family of God.

Rev. Dr. Sharon Stanley-Rea, Director, Refugee & Immigration Ministries, Christian Church (Disciples of Christ)
My sacred scriptures remind me: “When a stranger resides with you in your land, you shall not oppress the stranger…but they shall be as the citizen among you.”  (Leviticus 19:33-34)  To treat immigrants with justice in these ways means to give vulnerable people more attention in immigration debates than we give to partisan politics. I am getting arrested today to urge the President to do what he is able to do on Presidents’ Day and every day–give moral leadership by offering administrative relief to end suffering of thousands, ensure family safety, and protect the 5.5 million children in our nation within mixed status families from the threat of being ripped apart from their families at any time.

Ana Bonilla Martinez, New Jersey:
Not One More because our mothers and fathers have carried the weight of our world on their shoulders, and in these times, they desperately need some sort of relief in order to persevere, to dream, and to rejoice. That is why I am here, because I have my family, friends, and community in my heart, and this, my brothers and sisters, is a tragedy we can stop and correct. (Read her full statement here)

On Fred Korematsu Day: From Evacuation to Deportation on the Anniversary of Japanese-American Internment
Why I Got Arrested Praying at the White House – Ana Bonilla Martinez
Comments
Search the Blog
Video: Accompany the Struggle to Say No More Deportations
Click to Stop their Deportations