Sit-in at Equality Caucus: Be Champions for LGBTQ Immigrants in Administrative Relief

As part of the National #Not1More Deportation Campaign, LGBTQ Organizations from across the country called on the Congressional Equality Caucus to come out to ensure LGBTQ immigrants benefit from and are included in the broadest relief possible for undocumented people.

“Hello my name is (insert name) calling from (city & state) as an LGBTQ person or ally to demand that Congressman/woman (insert congressional members name) stand with undocumented LGBTQ immigrants. We urge you to work with the rest of your caucus to make a statement to President Obama that says that the expansion of administrative relief must not exclude LGBTQ undocumented immigrants that have been criminalized for their survival; and that the President needs to meet with undocumented LGBTQ people themselves as they are the ones truly affected and should be at the table advocating for themselves. Today, LGBTQ leaders are sitting in at the Equality Caucus because Obama will act soon around immigration and the issues affecting LGBTQ undocumented people are just too critical to wait and see if Obama will give us what we need.” 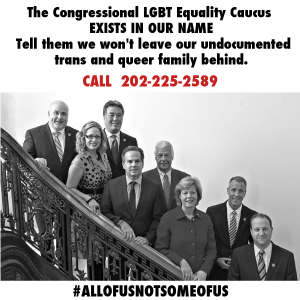 As part of the National #Not1More Deportation Campaign, LGBTQ Organizations from across the country are calling on the Congressional Equality Caucus to come out to ensure LGBTQ immigrants benefit from and are included in the broadest relief possible for undocumented people.

LGBTQ immigrants and allies will arrive at the Equality Caucus office at 10 AM on Wednesday, July 30, seeking the Equality Caucus’ active leadership in conversations related to upcoming administrative relief representing all LGBT people including the issues critical to LGBT undocumented people.

Gerardo Torres traveled from Arizona where he’s lived as an out gay and undocumented man for the past 20+ years. “Because of who I love I don’t have a family that would be recognized by the state for inclusion under most current classifications,” Torres explains, “The Equality Caucus is who I’m looking toward to make sure that Gay men who don’t have children or other biological family like myself are included.”

“Every day undocumented LGBTQ people are at high risk of deportation, and when detained, are often placed in solitary confinement just for being Trans or LGB. We cannot wait and see with the President. We need to actively implore and pressure him in the best ways we can.” Paulina Helm-Hernandez, Southerners On New Ground

“It is time to move beyond a binary conversation of “deserving vs. undeserving” immigrants, and realize that the survival decisions put in front of undocumented LGBTQ immigrants only range from bad to worse.” Jorge Gutierrez, Familia:  Trans and Queer Liberation Movement

The groups are asking the seven co-chairs of the Congressional LGBT Equality Caucus to come out in the name of the LGBTQ people that they represent in support of demands from the LGBTQ community that include:

Blue Ribbon Commission to the President: NO More Meetings About Us Without Us
ICE Allows Rape of Transgender Woman at Arizona Detention Center
Comments
Search the Blog
Video: Accompany the Struggle to Say No More Deportations
Click to Stop their Deportations