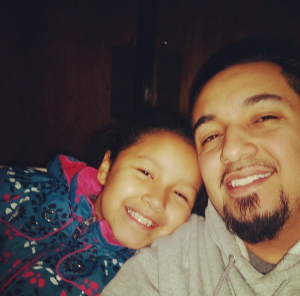 Six months ago Manuel Lopez’s 11-year old daughter, Bria, locked herself to the gates of the immigration office in Milwaukee,Wisconsin demanding his release. Just last week, Manuel was released from detention.  Knowing well he is not the only one, Manuel has come back to Milwawkee ready to continue supporting other families in detention, and has joined the local organizing efforts to keep families together.

On May 27 Manuel was taking his children to school, when Immigration and Customs Enforcement Agents rushed his car and detained him. Stephanie, Manuel’s partner of 20 years and their 5 children, including his 2-year old, watched as Manuel was taken away.

That day ICE agents raided homes and workplaces throughout Milwaukee’s south side, arresting at least 21 people locally and 297 in surrounding states, claiming that these arrests targeted dangerous criminals, and that the community was safer after their arrest.

Manny is 33 years old and has lived in the U.S. since he was 8. He is a caring father, a valued employee and an important member of his church, the Missionary Apostolic Church in Milwaukee. While he was detained, he received a lot of support from his family and community, including from his children’s school, where the principal has encouraged parents to make calls to ICE in support of Manuel.

Manuel was detained due to a 14 year old conviction, and could still lose his residency status, and could be deported away from his family.  Like many immigrants, when he was young Manuel’s family lived in an impoverished neighborhood plagued by gang violence, poor schools, unemployment, and a lack of resources for new immigrants. By the time he was in high school, Manuel’s classmates and neighborhood friends included those who had been recruited into gangs. But Manuel worked hard, graduated, and went to work in a meat packing factory with his father.

In 2000 Manuel was laid off. His daughter Destiny had just been born, and his family was increasingly in debt. In a moment of desperation Manuel agreed to deliver cocaine once for a friend who promised him money. But Manny’s friend had set him up, and he delivered cocaine to police. Without knowing that it would affect his own immigration status, he pled guilty and was sentenced to eight months in prison and twenty years’ probation, which he has not violated.