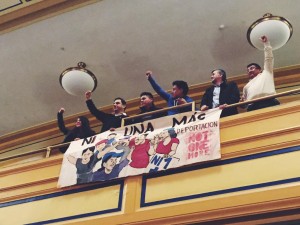 Immigrant activists and community groups delivered an open letter to Felicia Escobar, President Obama’s top immigration policy advisor, during an event this afternoon, 4 to 7 pm, at Fair Haven School in New Haven, Connecticut. We hope to shine a light on the many questions surrounding the “discontinuation” of Secure Communities (“S-Comm”), the failed deportation dragnet program.

We address you today to seek answers about federal policies that are undermining our human and civil rights for which we have fought so hard, and won, in Connecticut.

ICE has a history of retaliating against Connecticut’s pro-immigrant policies and deporting our community members in violation of DHS directives. We are concerned about recent reports that ICE officials refuse to comply with Obama’s new DHS mandates. We need to know the truth about ICE, given that President Obama’s budget request will not scale back ICE operations, and ICE will continue to target over 7 million undocumented immigrants in our community who are excluded from the President’s November 20th immigration relief.

We hope you will respond promptly to the Freedom of Information Request delivered on Friday March 6, 2015 at ICE Headquarters in Washington, DC, to “uncover the truth about PEP-COMM”, and more immediately, provide public answers to the questions included below.

We are confident that immigration reform will be possible when the United States reckons with the causes of migration and the harm of ICE operations in our communities.