Manuel’s Case: So Much of What’s Wrong with ICE

Manuel Roman Gutierrez has lived in the U.S since he was 16 years old. Last November, two weeks after his youngest daughter was born, he was stopped by Milwaukee police, and although he was not cited or charged, he was turned over to Immigration and Customs Enforcement (ICE).

It has been one year since Manuel was detained, and since then ICE has aggressively pursued removal against him. At every step of his deportation process, Manuel and his attorney have presented evidence that show that he does not meet any of the priorities for deportation set by the Department of Homeland Security (DHS), demonstrating that Manuel is not a threat to public safety, and that his deportation would negatively and irreparably affect his family.

The disagreement revolves around Manuel’s 9-year-old misdemeanor conviction for possession of a small amount of drugs. Although in Wisconsin this is a misdemeanor, for immigration enforcement it triggers what is called “mandatory” detention. Even so, the guidelines outlined by Secretary Jeh Johnson in his November 20, 2014 memorandum, Policies for the Apprehension, Detention and Removal of Undocumented Immigrants do not list “mandatory” detention and a misdemeanor conviction for simple possession as priorities, and therefore, ICE should use discretion to release him.

Throughout the case ICE has provided inconsistent answers as to why it insists on deporting Manuel. His case not only outlines ICE officials’ repeated denial of reviews without actual consideration, but the inconsistencies and outright contradictions between ICE’s protocol and practice.

First, the Department of Homeland Security wasn’t applying its new guidelines to the case at all

On January 30, 2015, after Manuel’s attorney submitted a request for prosecutorial and asserted that he did not fall under any of the current guidelines, Mirta J. Woodall, assistant Chief Counsel responded with the following:

On February 11, 2015, in response to a request for prosecutorial discretion, deportation officer Calvin Thompson, who has since been promoted, inaccurately stated that, “Manuel fits within the priorities because he had a cocaine conviction,” whereas Manuel’s misdemeanor conviction for simple possession does not fall within Priority 2 or any of the other priorities outlined. The misclassification was repeated on November 5, 2015, in response to an inquiry from Congressman Gutierrez’s office.

Then, Manuel was “Priority 3” 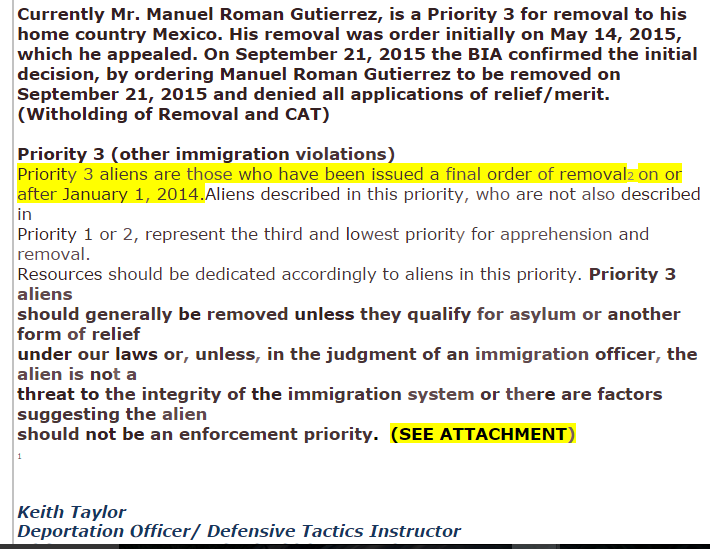 However, ICE’s argument that Manuel is priority 3 is solely based on the fact that ICE violated its own guidelines and placed him in removal proceedings when he was clearly not a priority to begin with under ICE’s November 20, 2014 Memorandum. Under this logic, ICE can make any individual a priority 3 by simply initiating removal proceedings against them and then using their own action as cause for prioritization. ICE’s argument that Manuel is a priority 3 is incorrect and one that they later changed.

When contacted with a request for review of the rejection of Manuel’s request for a stay, Sylvia Bonaccorsi-Manno, assistant field office director at the Chicago ICE office, on November 2, 2015 wrote the following:

A Pattern of Inconsistency and Ignoring the Evidence

In this case, the only one not following ICE’s policies is ICE.

To date, the series of responses from ICE regarding Manuel are inconsistent and inaccurate. Manuel’s case is a perfect example of the inconsistencies and lack of transparency within ICE and the lack of understanding and implementation of their own guidelines for priority as outlined in the November 20, 2014 Memorandum by ICE. All appeals and correspondence illustrate that Manuel does not fall under any of the three priorities outlined and should not be deported and separated from his loving family.

Manuel could be deported as early as this week. Please sign below to send a letter to ICE urging them to revise their decision and stop his deportation.

Sample Script: “I would like to leave a message for Director Saldaña. I’m calling in support of Manuel Roman, A# 206 274 132, the loving father of two U.S. citizen children. I’m aware that Mr. Roman has one misdemeanor for simple possession but according to DHS’s own guidelines he should not be considered “priority” for deportation. Mr. Roman’s case has garnered public attention and the interest Congressman Luis Gutierrez and Senator Dick Durbin, who are looking more closely into the case. I urge to use your prosecutorial discretion to stop Manuel’s deportation. Thank you.”

Immigrants Being Released by the Dept. of Justice Should Have Chance to ‘Reintegrate into Society,’ Not Face Deportation
#Not1More Reaction to 5th Circuit Delay of Deferred Action
Comments
Search the Blog
Video: Accompany the Struggle to Say No More Deportations
Click to Stop their Deportations