Started by 110 detainees and expanded to 150, 39 are continuing the strike at Krome, South Texas, and Aurora facilities at last count.

In multiple facilities, detainees report ICE resorting to torture tactics including sleep deprivation, solitary confinement, and forced catheterization in response to their refusal to eat. Earlier this week, supporters obtained court documents where an Alabama judge authorized force feeding of detainees whose health was deteriorating at the Etowah center prompting them, seven of whom who had already been transferred to the medical unit, to end their strike.

One striker who refused meals for 14 days, Mahbubur Rahman, sent out the message:

“When we started this hunger strike, we thought this was only our problem. But when we heard so many other centers also joined hunger strike, we realized that detention is a national problem. We started to shake the walls of these prisons and even gotten presidential candidates to respond to us. We thank all of the people who support us on the outside. While our hunger strike is ending, we know we have to continue to fight”

Another detainee, Mohammed Zakir Hosain, who led the hunger strike at Adelanto for 11 days said “We requested for ICE officials to come and meet with us to hear our demands, but got no response. If immigration authorities won’t follow their own policies, who will take responsibility to listen and do something?”

Started on Thanksgiving day, the hunger strike has quickly become an issue for the Democratic candidates after supporters rallied at the Clinton Campaign Headquarters in New York City.  Both Sen. Sanders and Gov. O’Malley issued statements of support for the strikers while a Clinton campaign representative listened to their concerns but has yet to support the detainees.

In a later event, Sen. Sanders met with a former hunger strike pledging to call ICE to demand their release and to schedule a visit to detainees in ICE custody. 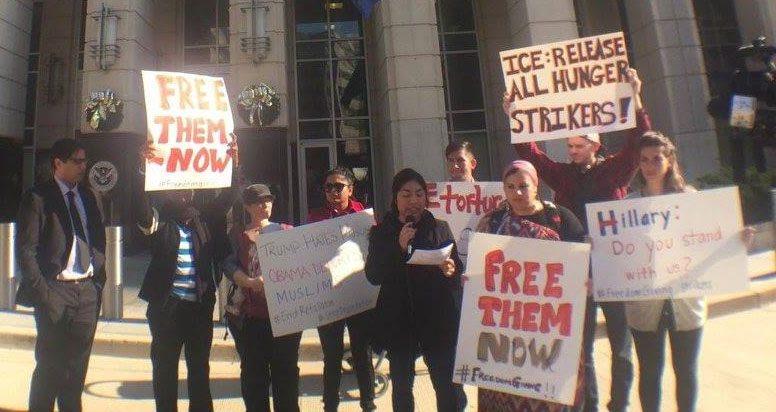 Today, Gov. O’Malley will hold a press conference at Sheriff Arpaio’s jail with Puente in Phoenix, Arizona to call for an end to detention and express his support for the strike.  Meanwhile, supporters in DC rallied at ICE headquarters with signs saying “Free them Now” and “Clinton: Do You Stand With Us?”

Supporters are raising concerns for the safety of those ending their strike and the detainees continuing to refuse meals at three facilities as ICE is now denying the agreement it made with Theo Lacy detainees and its guards continue intimidation and torture tactics.

“The United States is violating the human rights of people who came to this country seeking safety,” explains Fahd Ahmed. “People are literally starving for freedom in this country’s detention centers and authorities are responding with further abuse instead of due process, let alone compassion.”