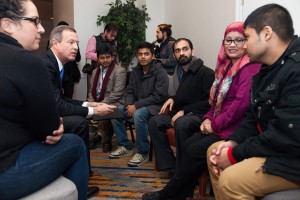 Even as the hunger strikes have drawn national attention, ICE has deported one of the key hunger strike leaders, Md. Tarek Ahmed, back to Bangladesh to imminent danger.

At the same time that Ahmed was being deported, two of his fellow hunger strikers from El Paso Detention Center were meeting with Presidential candidate Governor Martin O’Malley. After hearing about their lives and the conditions of their detention Gov. O’Malley remarked, “instead of giving them due process, we’re just rolling out more barbed wire.”

Mohammed Aminul Islam, one of the former detainees who met with O’Malley said, “I appreciate the attention for hunger strikers. But we need more than acknowledgement and future promises. We want to see leadership that takes action today! The candidates who say they support us should use their position to pressure ICE to halt deportations and release asylum seekers, or visit the hunger strikers to see what is really happening. Some of us will be deported and dead by the time the candidates act on their promises.”

The candidates who say they support us should use their position to pressure ICE to halt deportations and release asylum seekers … Some of us will be deported and dead by the time the candidates act on their promises.

Tarek and Aminul Islam were two of the 54 hunger strikers at El Paso Processing Center. Even before Tarek was deported, there have been worrisome actions taken by ICE in retaliation to the hunger strikers. For example, on October 20th, the 8th day of the hunger strike, ICE arranged for the Bangladeshi Consular Minister, Md. Shamsul Alam Chowdhury, to visit the facility to break their strike. He was given free access to the hunger strikers for over 10 hours which he spent interviewing, cajoling, intimidating, and pressuring them.

After the visit, the Embassy published a press release with pictures of the detainees, and posted it on their website. ICE’s actions violated the confidentiality provisions protecting asylum seekers (See 8 C.F.R. §208.6), and further endangered their lives by exposing asylum seekers to representatives of the very same government from which they are seeking asylum.

International and Bangladeshi press have published the hunger strikers stories and their photos, causing a firestorm of inquiry and calls for their punishment in Bangladesh as the asylum seekers were viewed as “dishonoring” their country.

“How can DHS deport somebody who is a victim and a witness to DHS and ICE’s violation of federal law while the investigations are pending? How can DHS deport detainees back to their home countries to face imminent danger that has been created by it’s own acts? There must be an immediate halt to the deportation of ALL detainees who were exposed to representatives of the Bangladeshi government at El Paso Processing Center on October 20th.” stated Fahd Ahmed of DRUM – Desis Rising Up & Moving.

For the past two and a half weeks, people seeking safety in the US who ICE has kept detained for up to two years have refused meals as part of the #freedomgiving hunger strike in seven different detention centers. Started by 110 detainees and expanded to 150, 10 are continuing the strike at Krome, South Texas, and Aurora facilities at last count. On Monday, the strikes were also joined by 6 people at Yuba County jail.

BREAKING: Clinton Protested by Hunger Strike Supporters Asking “Do You Stand With Us?”
“It Seems This Place is Like Guantanamo” – Detainees Protest Forced Feeding Order
Comments
Search the Blog
Video: Accompany the Struggle to Say No More Deportations
Click to Stop their Deportations