The best way to keep immigrant communities and families safe is to make sure people know their rights, organize to denounce the raids when they take place, and fight against the deportation of individuals targeted. 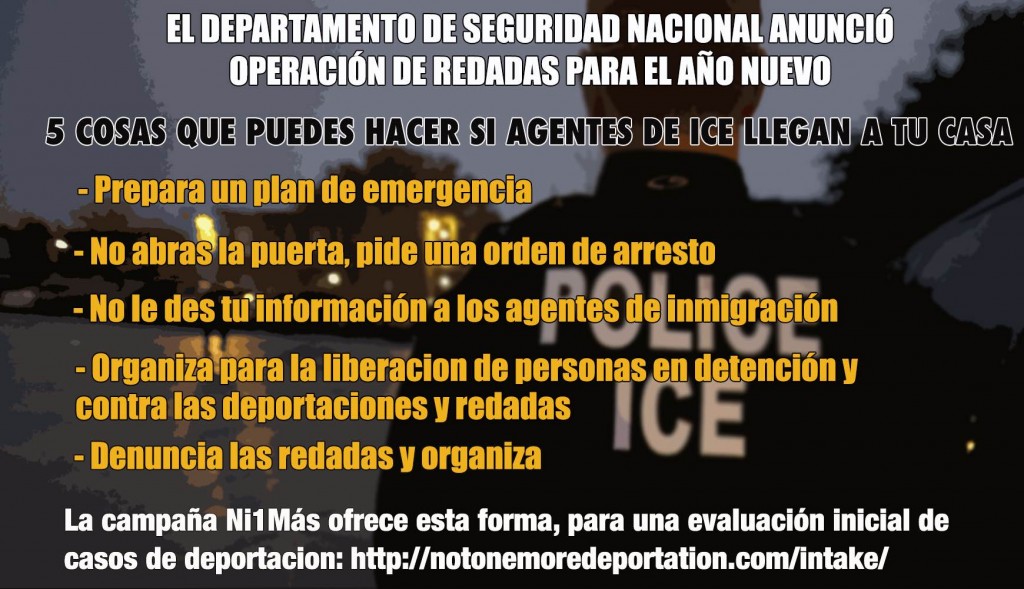 The Department of Homeland Security (DHS) announced that it is preparing for a number of large-scale raids targeting immigrants who recently came to the U.S. fleeing violence in Central America. Although the operation is only supposed to target individuals in this category who have already been ordered deported, ICE agents are known to broaden their operations to check the identity and background of other people in the household or even surrounding area, which means all immigrants should know their rights, regardless of whether they fit the announced ICE target.

In response to the raids, Tania Unzueta of the Not1More campaign said, “It is not new that ICE is doing raids. Immigration agents have been doing operations and terrorizing families across the country using whatever excuse they can to label a person a ‘priority for deportation.’ The difference here is that we know about them ahead of time and that gives us time to organize to keep our communities safe and to fight back when our families are targeted.”

In addition, the five things for immigrants to know if immigration enforcement comes to their home are:

1. Prepare by having an emergency plan and gathering documents. Individuals who may be targeted by ICE can prepare by gathering all their important documents and putting them in a trusted place, including any children’s birth certificates, tax information, medical information, school diplomas, immigration documents (the “Alien” number), etc.

If the individual is detained, these could be useful in fighting their case or getting them bond. If the individual has children, have an emergency plan with them, and know who would be called in case of a raid.

2. Do not open the door. No law enforcement agent can come into anyone’s home without a warrant signed by a judge. This includes immigration agents, even if they have a photograph or document showing the person they are looking for. This is not a warrant. If they have a warrant, they can share it or show it before the door is opened. Make sure that other people in the family know this, even young children.

4. Organize to get individuals released and fight deportations. Just because immigration enforcement has labeled an individual a “priority” for deportation – as they have the targets of these raids – individuals and communities still have a chance to fight the deportation. People  facing deportation should find a local community organization and a trusted attorney or get in touch with the #Not1More campaign to get an evaluation of their case and consider doing a public campaign to stop an individual released or stop their deportation.

The Not1More campaign offers this form, for people to get an initial evaluation of their case if they are facing deportation: http://www.notonemoredeportation.com/intake/

5. Denounce the raid and organize. Do not suffer or fear in silence and isolation. Everyone needs to know that these raids are happening. Individuals who have experienced raids and those concerned should talk with others in their neighborhood about what is happening and how to have a safety plan. But also talk about it with community organizations, local elected officials, news media. It is important that these stories are denounced publicly.

“It Seems This Place is Like Guantanamo” – Detainees Protest Forced Feeding Order
On Christmas Day Faith Leaders Offer their Churches as Sanctuary to Those Hunted in Raids
Comments
Search the Blog
Video: Accompany the Struggle to Say No More Deportations
Click to Stop their Deportations