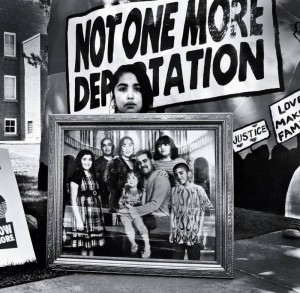 As early as tomorrow, January 15th, 2016, the Supreme Court is expected to decide whether or not it will hear the deferred action injunction case.  It’s an important step in the battle to see the relief the President announced in November, 2014 for undocumented parents of US citizens and some of the childhood arrivals who were over the age of 32 when DACA was announced.

But the Supreme Court is not the only place for action on immigration. President Obama has options for immediate steps he can take to reduce the suffering caused by current immigration policy and to take a more humane approach. But this year, he’s so far done the opposite.

Some believe the raids that have unleashed renewed terror in immigrant communities are actually the President’s strategy to show the Supreme Court he’s serious about his “priorities.” But you never stop deportations by deporting people.  When the administration targets people for raids, it casts suspicion over the entire community and reinforces criminalization. With Trump poisoning the public conversation with fear and enlivening a frightening far-right base, it’s even more urgent for the President to make concrete advances to move the debate and policy in the opposite direction.

The best way to win legalization and relief is through the Administration doing everything in its power to demonstrate what that looks like, to show that we are valued members of society not disposable quota-filling statistics, and to demonstrate that abuse is unacceptable.

RFP: Obama Library Now Soliciting Proposals for “Deporter-in-Chief” Wing
The Pernicious Reality of Silence: How the Democratic Party Wants to Win the Latino Vote
Comments
Search the Blog
Video: Accompany the Struggle to Say No More Deportations
Click to Stop their Deportations