Mother with DACA Deported from O’Hare by Border Patrol, Returns and Reunites with Family 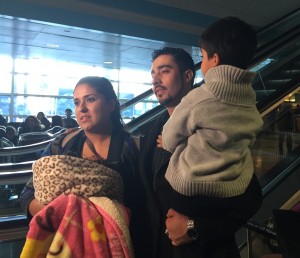 Chicago, IL – What was supposed to be a long-awaited visit to family members in Mexico became a terrifying ordeal for Lesly Sophia Cortez-Martinez when Border Patrol at O’Hare airport refused to let her back into the country and instead deported her with her two youngest children.

Lesly is a DACA recipient who has been in the US since she was 15 years old and the mother of three citizen children. Over Christmas she applied for and received permission from US Citizenship and Immigration Services (USCIS) to be able to travel abroad with a routine status called ‘advance parole.’

Yet when she arrived, Border Patrol ignored her deferred action status and the permission granted by the other agency within the Department of Homeland Security. Agents held Lesly and her children inside O’Hare airport, refused to review the emergency filings of her lawyer, and ultimately deported her back to Mexico.

The community pressure and legal support moved the agency to reconsider its mistake and allow her to return afterall. For the past week, supporters have been emailing Ricardo Wong, field director for Immigration and Customs Enforcement, demanding #handsoffLesly when she comes back.

Today she and her children arrived at O’Hare and after screening were able to reunite with her husband and eldest son.

Yet their case is still not closed. ICE did not detain Lesly but they did put her in deportation proceedings. Lesly and her attorney will continue to fight her case in court, with the support of the community.

But her lawyer and other supporters want to see her case closed and say it raises broader questions as to how DHS is functioning.

“When relief is granted by one agency it should be respected across the board,” explains her lawyer Mony Ruiz-Velasco. “DACA recipients across the country are looking to DHS to clarify that this will not happen again.”

Lesly herself expressed her gratitude to supporters who she credited with her ability to come back to her family and home. “This is why we have to organize and be together. We have to protect each other when they violate our rights.”