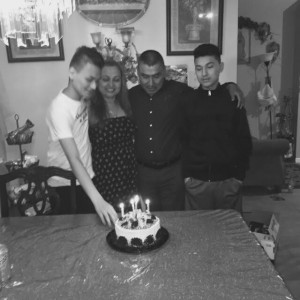 Below is a letter from the #Not1More team at Mijente asking the Department of Homeland Security policy people about their policies on stopping deportations and using discretion when it comes to people with some sort of criminal history. The letter uses the example of a Tennessee father, Mr. Padilla-Ochoa, who was charged with a DUI 8 years ago, and facing deportation. Find out more about his case and sign his petition here.

Re: Inquiry on policy of use of prosecutorial discretion for individuals with a case history that fit a DHS priority category for removal

I am writing to you to make an inquiry regarding the use of prosecutorial discretion by immigration enforcement officials on cases of individuals that fit one of the priority categories for removal, as described in Secretary Johnson’s November 20, 2014 memoranda, Policies for the Apprehension, Detention, and Removal of Undocumented Immigrants (“Priorities Memorandum”). We are specifically interested in knowing:

As described by the Priorities Memorandum, individuals who are convicted of a “significant misdemeanor” are considered part of the “Priority 2” enforcement category, which according to the memorandum includes convictions of driving under the influence. Although the document itself provides little guidance on how to weigh other factors, the “Frequently Asked Questions Relating to Executive Action on Immigration” published on the ICE website provides further guidance on the use of prosecutorial discretion in cases involving DUI, stating;

While individuals convicted of significant misdemeanors generally fall within Priority 2 of Secretary Johnson’s November 20, 2014 enforcement priorities, the Secretary’s guidance makes clear that, on a case-by-case basis, certain designated senior-level officials can determine that such an individual is not an enforcement priority when there are factors indicating that he or she is not a threat to national security, border security, or public safety. As with all criminal convictions, these factors could include the length of time since conviction, age at the time the offense was committed, sentence and/or fine imposed, whether the conviction has been expunged, and evidence of rehabilitation.

In the specific context of DUI offenses, such factors may also include the level of intoxication; whether the individual was operating a commercial vehicle; any additional convictions for alcohol or drug-related DUI offenses; circumstances surrounding the arrest, including presence of children in the vehicle, or harm to persons or property; mitigating factors for the offense at issue, such as the conviction being for a lesser-included DUI offense under state law, and other relevant factors demonstrating that the person is or is not a threat to public safety.

The document goes on to say that for Priority 2 “These aliens should be removed unless they qualify for asylum or another form of relief.”  Yet it has been our experience working with people in deportation proceedings with DUI charges that ICE has aggressively pursued deportations of individuals with these convictions, with little regard for mitigating circumstances when individuals fit one of the stated DHS priority categories.

The case that prompted this inquiry is that of Mr. Ladislao Padilla-Ochoa (A 076-301-279). As shown in the prosecutorial discretion request attached to this letter, shared with permission of the individual, Mr. Padilla-Ochoa is an immigrant in immigration detention currently requesting use of prosecutorial discretion in his deportation case. The New Orleans ICE office has denied a stay of removal, specifically citing that Mr. Padilla-Ochoa is a Priority 2(b) individual due to a “significant misdemeanor conviction.” The conviction is for DUI on November 17, 2008, after which he was placed in deportation proceedings.

The following are factors that Mr. Padilla-Ochoa asked the New Orleans ICE office to consider in evaluating his request for prosecutorial discretion:

On March 9th, 2016 the Tennessee Immigrant and Refugee Rights Coalition (TIRRC) filed a second Stay of Removal application for Mr. Padilla-Ochoa in Nashville, Tennessee. In addition to the information requested, we urge that your office ensure the policy is appropriately implemented and the case is appropriately reviewed.

Although the denial of prosecutorial discretion by the New Orleans ICE office in the case of Mr. Padilla-Ochoa is what prompted this inquiry, there are numerous examples of how ICE offices throughout the country have inconsistently treated individuals with DUI charges and other “significant misdemeanors,” particularly when it comes to the consideration of prosecutorial discretion. Attached is a DHS third party privacy waver authorizing disclosure to a third party signed by Mr. Padilla-Ochoa, in case it is needed.

Given that ICE is aggressively pursuing people with these charges, with tactics that include mass field operations, or immigration raids, the answer to these questions is of great importance and urgency to immigrant communities, particularly those who are targets of enforcement. For these reasons, we thank you in advance for providing this information.

For a response to this e-mail or if you need to reach us, please feel free to e-mail us at tania@mijente.net and jacinta@mijente.net.