Tell the Arizona Chamber to Remove Private Prison Company, CCA, from its Membership 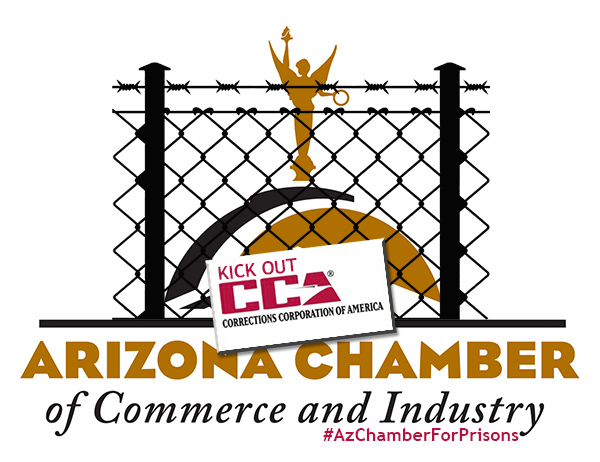 To: Arizona Chamber of Commerce

Terminate the membership of the Corrections Corporation of America. Prison profit shouldn’t guide your policy positions.

In recent months, Trump’s campaign has inspired Arizona legislators to propose a new set of SB1070-style laws. Given the impact of SB1070 on our state and the negative economic impact of the bills proposed, you’d expect the Arizona Chamber of Commerce to stand against them, but not when one of the country’s largest private prison companies, CCA (Corrections Corporation of America) is one of its core members.

Governor Doug Ducey signed HB2451 into law on March 30th 2016. The new law ensures undocumented people stay in jail longer and is expected to cost $17,000,000.00 to Arizona taxpayers according to the Arizona Department of Corrections.1

Despite earlier opposition to the bill, after its signing, the Chamber put out a letter defending the Governor and in support of HB2451. The Chamber should remember the $200 Million dollars lost due to boycotts and damage caused by past anti-immigrant bills like 2010’s SB1070 but while Chamber members felt the negative impact, one member, stood to gain millions.

The Corrections Corporation of America as early as 2005 identified detaining immigrants as a growth industry.2 It was a core collaborator on the drafting and lobbying of SB1070 through the controversial American Legislative Exchange Council (ALEC) where it coordinated with now-recalled Russell Pearce and other sponsors of the racial profiling bill.3

Membership of one of the largest private prison companies in the country is a conflict of interest for any group involved in discussion on immigration or prison policy in the state.  Tell the Chamber of Commerce to remove CCA from its membership or remove itself from any discussion and lobbying on our state’s policies.