In the wake of the reports that the Department of Homeland Security is gearing up for a 30 day offensive targeting refugee mothers and children, the teachers of 9 high schoolers who have been held in detention since early 2016 interrupted Sec. Johnson at a commencement speech in Nashville, TN.

“We want to see our students graduate but that’s impossible when ICE agents stalk them outside their houses and DHS refuses to release them from detention,” explains Holly Hardin, a teacher who traveled from Durham, North Carolina, to confront Johnson. “Johnson has no business addressing high schoolers about their future when he’s thrown the future of refugee teens into jeopardy.”

Teachers and Students Tell Johnson to Stop the Raids

At the start of 2016, DHS announced it would perform sweeping raids across the country targeting Central American mothers and youth who came to the country seeking to flee violence in their home countries.  Dubbed Operation Border Guardian, the raids involved ICE agents taking teens enrolled in high school in North Carolina, Georgia, and elsewhere in the country into custody, arresting them on their way to school, and holding them in detention.

Teachers and families of the teens have been rallying for the release. While one student was deported in March, another whose case demonstrates the lack of representation and faulty claims the government has against the youth was already released. Nine more remain in detention.

Nashville youth reacted the Sec. Johnson coming to their town with anger. Naomi Sepulveda, an 8th grader in Metro Nashville public schools said, “It’s hard knowing that main guy that deports families is in Nashville and at our school. I want him away. It hurts me. It hurts me as much as how it hurt when my uncle was deported. And if my parents were ever deported who would help me? I’m a young girl my brother is still a kid and I’m his big sister. My parents didn’t bring my brother and me to the U.S. to fool around we came for a better future. Now this man is coming and wanting to deport all Central Americans but we must stand up for each other for our families so that we could all be safe and have a great future.”

Supporters and teachers of the students stood up during Johnson’s speech chanting “Education not Deportation” as others distributed flyers to attendees outside. 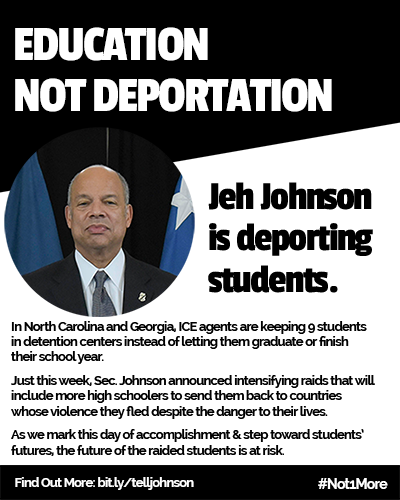