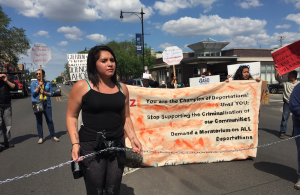 13 year old Maria is leading a group of Chicagoans in a civil disobedience outside the Northwest side office of Representative Luis Gutierrez calling on him to be a champion for her father, Jose Juan Moreno who is entering his third month in sanctuary in a Southside church, and to to take the demand for a moratorium on deportations to Hillary Clinton and the Democratic National Convention.

Despite being a father of five and now a civil rights leader in his fight to stay with his family, Rep. Gutierrez has yet to take up Maria’s father’s case, citing a six year old DUI charge as reason to refuse to advocate on his behalf.  But Maria, her family, and supporters are saying that that moment doesn’t define her father or other immigrants being targeted for removal and are asking the Representative to be a champion for the entire immigrant community.

“Clinton put Luis Gutierrez on the party’s platform committee to represent on immigration. He has the responsibility to lead for a moratorium on all deportations to protect our entire community,” explains Arianna Salgado, OCAD/PASO.

“Our entire community deserves a champion and is worthy of defense. Being a victims of Chicago’s profiling police force that disproportionately targets Black and Latino residents should not be a reason to be written off by our elected officials or in any reform proposals.” adds Rosi Carrasco, OCAD.  “To be a champion for immigrants in this moment means being a champion for a moratorium on all deportations. Candidate Clinton needs to take up that demand and Rep. Gutierrez needs to make sure she knows it.”

In the wake of the Supreme Court decision that left the injunction in place blocking the expansion of deferred action programs that would’ve benefited millions, the Chicago protest is part of a national wave demanding that the current administration do more to protect immigrants targeted for removal and to dismantle ICE.

The participants are gathering at Gutierrez’s office because he was nominated by the Hillary Clinton campaign to participate in drafting the Democratic National Committee platform ahead of its convention later this month.  They point to previous comments from the Representative that add to the criminalization of undocumented Chicagoans and raise concerns that reforms to mass incarceration and previous contact with law enforcement will still exclude immigrants from the future reform proposals.