The same day that the New York Times released an editorial naming the release of raided students as an urgent item for the President to take up, students of those teachers interrupted a campaign event of  Candidate Clinton and President Obama in North Carolina, a state hit hard by recent ICE raids, calling for their release.  Below is their statement.

We come here today as teachers, students and community members to demand that President Obama and former Secretary of State Clinton release all detained refugee youth back to their classrooms and communities.

Immigration enforcement agents are operating unchecked: raiding refugee families, snatching kids at bus stops, deporting youth back to gang violence, and holding students in detention centers and deportation proceedings for nearly 6 months. ICE is denying our students their right to an education and preventing many from graduating.

As teachers, it is our job to make sure our students can learn and grow. When they can’t, it is our duty to fight for that to change. Our students are being picked up by ICE on their way to school. Yefri Sorto Hernandez was taken from his bus stop in Charlotte in January while his mother watched from the window. Wildin Guillen Acosta was picked up a day later outside his Durham home on his way to Riverside High. Hundreds more youth have been targeted and arrested by ICE in recent months. Some have been deported. Others, like Wildin, sit in jail cells with no release in sight.

Currently, at least nine youth from North Carolina and three from Georgia are being held in demoralizing conditions at Stewart and Irwin Detention Centers in Georgia. One youth, Wildin, was recently sentenced to 45 days of solitary confinement at Stewart for minor infractions including helping another inmate translate a letter into English. His sentence was reduced to 10 days only after significant community and political pressure. We believe that our students are facing retaliation for being high profile detainees.

These youth are Central American refugees. They have come here to escape violence and if deported, they risk death.  Pedro Salmeron, a student from Vance High School currently detained at Stewart, fled El Salvador after his cousin was decapitated and castrated by gang members. Pedro was pressured to join a gang or else risk torture and death.

Many of these youth are dedicated students, ready to graduate in their final semester of high school. Now they have been in jail for 6 months and continue to face indefinite detention without access to education.

President Obama, stop deporting our students. You can make sure schools and communities stay together. Declare a moratorium on deportations immediately. Release all detained refugee youth now.

Former Secretary of State Clinton, you have promised that, if elected, you “would not deport children” and would “stop the raids.” That future promise requires action in the present moment. Will you do everything within your power to push for the immediate release of the 12+ detained young people.

Holly Hardin, middle school teacher in Durham:  “Wildin came to Durham, NC seeking the safety to be a kid, learn, and make a life. His capture, detention, isolation in solitary, and potential deportation puts Wildin into harm’s way.  I am here to ask Obama to dismantle the system thato captures immigrants that he created during his presidency, in order to protect all my students. Release Wildin and all the youth back into our communities where they can survive, learn, and thrive.” 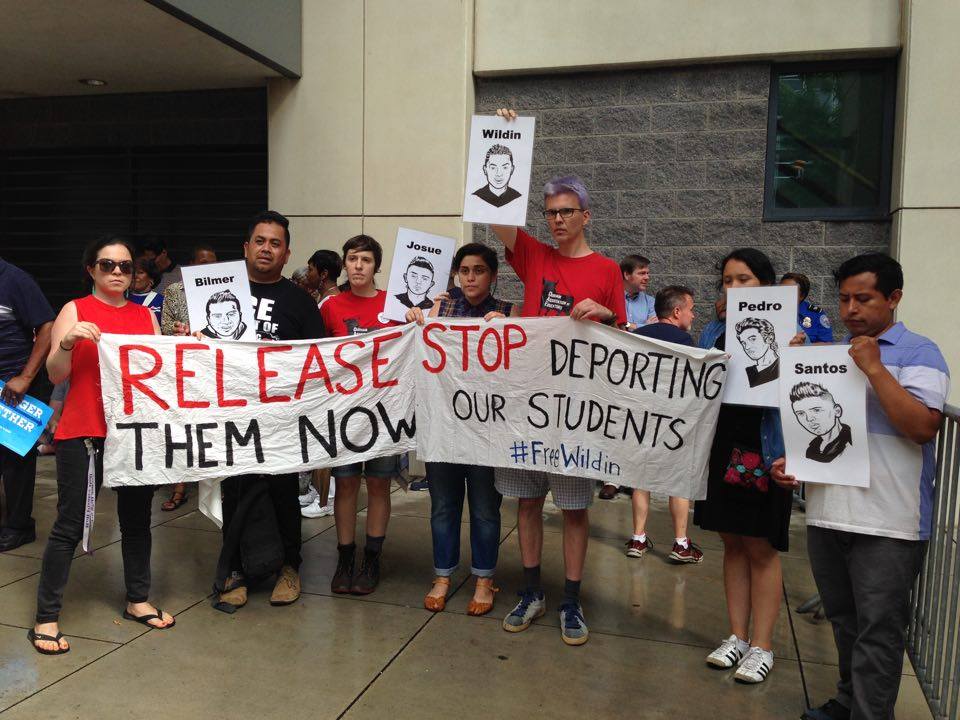 Teenage Girl Takes Street to Ask Gutierrez to Be Champion for Father in Sanctuary, Call for Moratorium on Deportations
DNC March Says to be the “Anti-Trump,” Clinton & Dems Must Halt Deportations
Comments
Search the Blog
Video: Accompany the Struggle to Say No More Deportations
Click to Stop their Deportations