Arely, Mother of 3, Battles Deportation to Remain with her Family 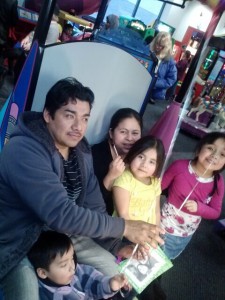 Meet Arely Tomas Orozco:  Proud mother of three U.S. citizen children who has been in the country since 2005 and yet another example of local police racially profiling to do ICE’s work.

In 2008 while in Phoenix, Arizona Arely was arrested while waiting at a bus station to go to the supermarket and spent three days in jail – with her 3 month old daughter.  She was released, then evicted by her landlord because of her immigration status. As a result she did not receive her immigration court date or the subsequent deportation order.

Now, Arely resides in Syracuse, NY with her husband and children.  On January 8th, they were stopped by a state trooper.  When her husband, the driver, could not present the officer with the documentation he needed, the officer proceeded to demand documentation from the all passengers, including Arely.  He then called Border Patrol, who arrested her.  Now her final court day is approaching.

Sign the petition to support Arely and her efforts to remain with her family.

If Arely (A# 089-818-675) is deported, Lisania (6 years old), Karen (5 years old) and Angel (3 years old) and husband Hector will be separated from their mother and wife.  It is precisely these cases, that demonstrate the dangers of local police seeking to enforce federal immigration policy.  And it is families like the Orozco’s, who should be included in immigration reform.

Elder Has Been in Detention for 3 Years, Tell ICE to Let Him Go!
Facing Deportation for Working to Feed their Families, Free Arpaio’s Latest Victims!
Comments