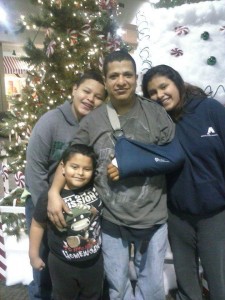 Jesus “Chuy” Rosales Esparza (A#206-274-371) is the father of 3 U.S. citizens  and has lived in Green Bay, WI, since 1995. Chuy’s children, Robert – 15, Anahi – 13, and Miguel – 5, are missing their dad tonight, because ICE detained him at his home last Sunday. For the last 7 years Chuy has worked long hours at a paper factory to provide for his family. He is married to Melissa, an Oneida woman who has been hobbled by health problems for the last few years because of a staph infection that at times has left her unable to walk. Chuy has had to care for her and the kids through her hospital stays.

Chuy poses no threat to public safety and he is not a high priority for deportation. He is a family man who has chaperoned his kids’ field trips at all three of their schools, and who has volunteered with the local St. Vincent de Paul society and with more recently with the food pantry at the First United Methodist Church in town.

ICE points to Chuy’s minor criminal record as the reason they are detaining him: Chuy had two DUIs in 2003. Since that time, Chuy has stopped drinking and built his life around his kids. Chuy’s record for the last 11 years includes only stops for driving without a license, which he must do to provide for his family. He is exactly the kind of parent who would qualify for the new deferred action programs if it wasn’t for the government’s decision to arbitrarily exclude people convicted of DUI.

UPDATE: Thank you for your support. Jesus was released from detention and is now awaiting court scheduled for January 2016.

I am writing in support of Jesus “Chuy” Rosales Esparza (A#206-274-371), a married father of 3 U.S. citizens who has lived in Green Bay, WI, since 1995. Chuy is the sole provider for Robert – 15, Anahi – 13, and Miguel – 5, and also for his wife Melissa, a U.S. citizen and Oneida Indian. Melissa has suffered health problems from a staph infection that at times has left her unable to walk. For the last 7 years Chuy has worked long hours at a paper factory to provide for his family. Chuy has had to care for her and the kids through her hospital stays.

I am aware that Chuy has a conviction for DUI. However, this happened in 2003. In the time since then, he has been a family man and a pillar of his community, chaperoning field trips at his kids’ schools and volunteering at a local food bank and the St. Vincent de Paul society. Please use your discretion to release Chuy from detention and close his case.