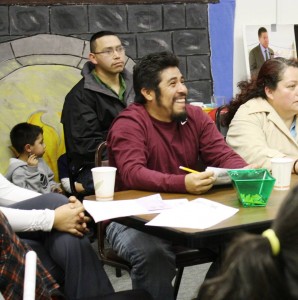 UPDATE: Constantino was deported despite community efforts. In April, he was found shot in his home town in Mexico.

Constantino is a father and an organizer with the Iowa Citizens for Community Improvement who is at risk of being deported. While he has lived in the U.S. he has stood up for the rights of workers and immigrants, participating in various campaigns against wage theft, for immigration reform, and against state and city policies that lead to deportations and

separation of families. As part of his organizing he has met with Sheriffs and US representatives telling his story and advocating for changes that would improve the lives of all Iowa residents.

Last year Constantino was placed in deportation proceedings after being detained at work. When he went in front of the judge, he had to represent himself because he had no money to pay for a lawyer. He believes because he was not able to present his case as well as an attorney, he lost his case, and could not be removed at any time.

Constantino has already sent a request for prosecutorial discretion, which the local ICE Field office has denied. Senator Grassley and Senator Harkin have both taken interest in the case, but ICE continues to deny his stay of deportation.

Please sign below to support Constantino and stop his deportation.

E-mail to ICE in support of Constantino

I am writing in support of Mr. Constantino Morales Roque, A# 200-588-443. Mr. Morales Roque left his country after him and is family received various threats to their life and safety, in retaliation for being an honest police officer in the state of Guerrero, Mexico. Since he has been in the United States he has done nothing but work to help his family survive. He has become an important member of the Iowa community and has become involved in various civil rights and civic engagement projects and organizations. Most recently he has been a volunteer with the Iowa Citizens for Community Improvement, an organization that fights for social, economic and environmental justice in the state. He has also been active in community projects seeking to improve safety, working to improve the relationship between immigrant communities and law enforcement. As part of his organizing he has met with Sheriffs and US representatives advocating for changes that would improve the lives of all Iowa residents.

In 2013 Mr. Morales Roque was placed in deportation proceedings. Unfortunately, his asylum claim was denied and he now finds himself in danger of being deported. I urge you to review his case, and use positive exercise of prosecutorial discretion to stop his deportation.

Victim of Sex Trafficking & Cancer Survivor Needs Her Husband, Please Stop His Deportation
Texas Father of 2 to be Deported
Comments