***UPDATE: ICE deported Pablo to Ecuador this morning. Juntos and the Cardenas family thank everyone for your support.
We couldn’t stop his removal. But you can still sign for Pedro in Connecticut. 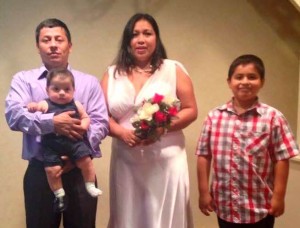 Mr. Pablo Fabian Cardenas is one of the two thousand people who fell victim to ICE’s “Operation Cross Check” in early March. He has lived in the US for the past fifteen years. He has two US Citizen children, Ismael age 9 and Erick, who just turned one without his father there to celebrate.  He is a local business owner of an auto repair shop with his US citizen brother.  His work makes him the key financial provider for the family.  His wife is preparing to apply for DAPA while her asylum application is reviewed.

Pablo poses no threat to public safety and he is not a high priority for deportation.
Mr. Cardenas is a beloved father and member of his community.

In 2009, local police in Pennsylvania stopped Mr. Cardenas while he was parking a car. They said the stop was for a broken tail light but arrested him and charged him for a DUI. Due to bad legal counsel, Pablo eventually pled guilty instead of requesting a rehabilitative program that could have prevented the conviction that prompted ICE’s removal proceedings.

Even though he’s had no other interaction with law enforcement since 2009, he and his family have had to fight his deportation case for the past six years, spending close to $26,000 so far to keep their family together. After being represented by a lawyer with multiple malpractice suits against him, they refiled their claims.

If not for the incident in 2009, Pablo would qualify for President Obama’s Executive Order.

Read the Support Letter for Pablo

I am writing in support of Pablo Fabian Cardenas (A# 089-240-891) a married father father of two US citizen children, Ismael age 9 and Erick, age 1 and has lived in Philadelphia, PA since 2000.  Pablo is the sole provider for his children and wife Maria Elena, who is DAPA eligible.

I am aware that Pablo has a 2009 DUI conviction but he has since not had any interactions with the law and paid his dues to society. He is a local business owner and has contributed to the economic growth of Philadelphia. If not for this minor DUI, he would qualify for President Obama’s Executive Order.

Please use your discretion and do not allow Pablo to be deported back to Ecuador. Please grant him a stay of removal.

Father of U.S Citizen Toddler Set to be Deported Today. Tell ICE to Stop Elvis’ Deportation!
Father of Two To be Deported This Friday for 10-Year Old Misdemeanor
Comments