Raped in Detention, Call ICE and Ask for Douglas’ Release! 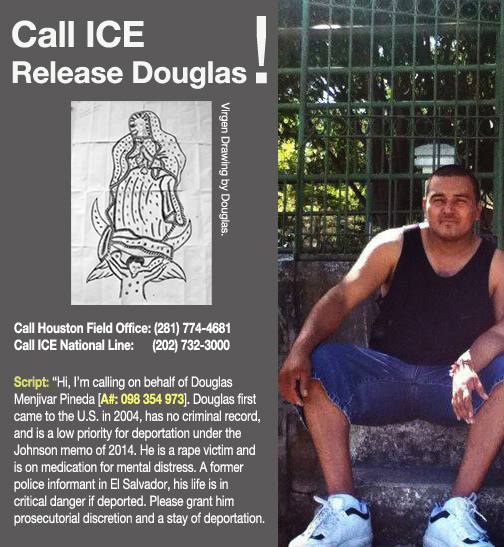 Mr. Menjivar-Pineda has no criminal record and should not be a priority for deportation. I am aware that Mr. Menjivar-Pineda was ordered removed after missing an immigration court in 2005 but he does not pose a threat to national security, border security, public safety, or the integrity of the immigration system. Furthermore, Mr. Menjivar-Pineda left El Salvador in 2013 after receiving death threats from violent groups. If deported his life would be in grave danger. I urge you to exercise favorable use of Prosecutorial Discretion and release Mr. Menjivar-Pineda so he can receive the proper medical and mental health services he needs.

Can you help Douglas and send a message to the Houston Field Office Director asking for his release?

Douglas Menjivar-Pineda (A# 098 354 973) is currently detained at the Polk Detention Center in Texas. Before being transferred to Polk, Douglas was at the Joey Corley Detention Center where he was raped. Douglas tried to report the incident to ICE officials but instead of providing support they ridiculed him and ignored his pleas for medical attention. Douglas’ physical and mental health has declined to the point of being unbearable. At the Joey Corley Detention Center Douglas participated in a hunger strike to bring attention to the inhumane conditions of the facility and his case. As a result of  his involvement in the hunger strike ICE transferred Douglas to another detention center; instead of addressing  Douglas’ concerns ICE  continues to shut him down.

Douglas came to the United States from El Salvador in 2004 to work and provide for his family but when his father became fatally ill in 2009, Douglas returned to look after him. His father passed away and Douglas lived in El Salvador for several years until he was threatened by violent groups for serving as a police informant. If deported Douglas’s life would be in grave danger.

Douglas has no criminal record and based on the memorandum issued by DHS on November 20, 2014 entitled “Policies for the Apprehension, Detention and Removal of Undocumented Immigrants” he is not a priority for deportation. ICE refuses to release him because Douglas was ordered removed in absentia when he missed an immigration court 10 years ago! This is not enough to send him to his death and further debilitate him.

COMMUNITY LEADER AND FATHER OF 4 DETAINED AT ELOY DETENTION CENTER NEEDS TO BE RELEASED FOR PROPER MEDICAL ATTENTION
Loving father of 4 US citizen children in detention. Support Jaime, tell ICE he should be released and reunited with his family.
Comments