UPDATE: Edgar Javier Marin was released from immigration detention. The judge on the criminal case agreed to reduce the charge to a misdemeanor interfering with a police officer. Since he no longer has a felony on his record, ICE has released him and he will be making a request for ICE to close his case, which he expects will be accepted. Thank you for your support.

Edgar Javier Marin came to the United States 13 years ago as a legal  resident to live with his mom. In 2011, Javier was violently beat by notorious East Haven police officer Dennis Spaulding. During that incident, Javier was arrested by Spaulding and charged with assault on a police officer. Javier pled guilty and finished his community services. In January 2014, Spaulding was sentenced to 5 years in federal prison, convicted with the help of Javier, who testified against Spaulding.

However, now ICE has detained Javier, and is threatening to deport him, based on the guilty plea resulting from the encounter with Spaulding. Please tell ICE to release Javier, and stop his deportation! 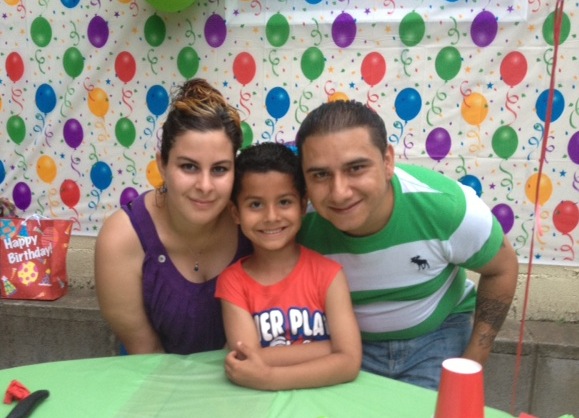 I am writing to you regarding the case of Mr. Edgar Javier Marin (A 047-077-505), a New Haven community member and public advocate who is currently in Immigration and Customs Enforcement custody, as of Thursday January 30, 2014.

Mr. Marin came to the United States as a legal resident 13 years ago at the age of 18 to live with his mother. He is the father of a 6-year old United States citizen, Alejandro, whom he is raising with his partner Bianca. He is also a well known community member in New Haven, where he lives and volunteers coaching youth soccer and volunteering with the community-based organization, Unidad Latina en Acción.

In 2011 Javier was beaten by Dennis Spaulding, the notorious East Haven police officer who was sentenced to 5 years in jail for harassing Latinos and falsifying police reports to cover up his actions. Mr. Marin testified that on June 28, 2011, Officer Spaulding wanted to tow Javier’s car without justification. When Javier simply stated that he needed to get his construction tools out of the car because he needed to go to work, Spaulding threw him to the ground violently, put his boot on Javier’s neck, and tasered him multiple times. Spaulding then charged Javier with assault on a police officer, and the public defender advised Javier to plead guilty in exchange for probation. Javier went on with his life, and completed probation. He eventually became part of dozens of witnesses who testified to the FBI and the court about systematic brutality in the East Haven Police Department.

Several years later, on January 30, 2014, ICE went to Javier’s workplace and detained him. Although Javier is a legal resident and has never done anything wrong, ICE wants to deport him and separate him from his partner, son and entire family and community because of that guilty plea.

I am writing to you urging you to use your discretion to stop the deportation of Mr. Edgar Javier Marin.

Cecilio is set to be deported as early as next week!
Rhode Island Immigrant Could be Deported, Act Now to Urge the Governor of Rhode Island to Stop Honoring ICE Holds
Comments