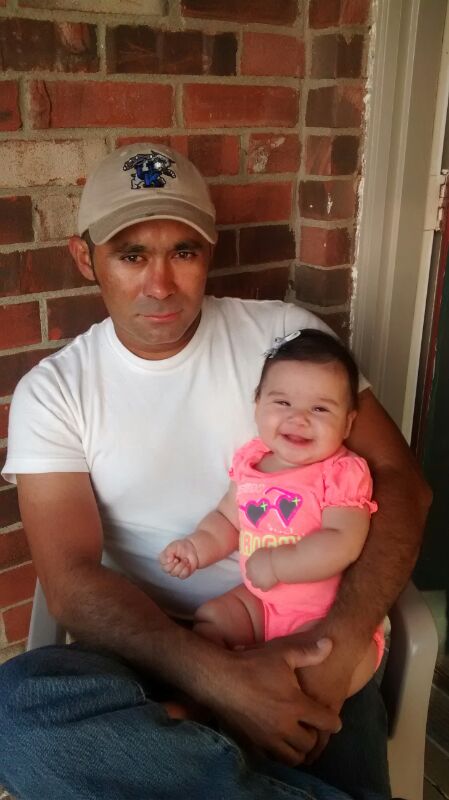 Elvis Omar Cano-Morales (A#200-204-793) is set to be deported this morning! Elvis is the loving father of a 15 month old daughter and will become a father again next month, but ICE wants to deport him and separate him from his family.

Will you send a message to New Orleans ICE Field Office Director and ask them to stop Elvis’ deportation?

ICE detained Elvis at the Greyhound bus station in Louisiana, while traveling  for work to provide for his daughter of 15 months and his pregnant wife.  ICE considers Elvis  a “priority” for deportation because upon his return to the U.S. in 2011 he was detained and deported. Elvis was convicted of illegal re-entry, a federal felony, and is now set to be deported again and away from his two daughters.

Elvis came to the U.S. in 2007 from Honduras, he settled in Kentucky where he began working to provide for his family. In 2011 Elvis’ father became ill and Elvis returned to take care of him. Elvis’ father died a few months later  and  after burying his only relative left in Honduras Elvis began his trip back to the United States.

Elvis’ detention  has negatively impacted Elvis’ wife, her pregnancy and their 15-month-old daughter. Elvis’ wife  was forced to move to Foley, AL several months ago after they lost their house due to financial hardship. His wife has not been able to work since she became pregnant and without Elvis at home it became difficult to provide for their oldest daughter. Elvis’ wife is now living with a family that she met while shopping at a nearby store, and is completely dependent on them for her financial needs.

Send a message to ICE Field Director and ask them to stop Elvis’ deportation. Elvis should not be considered “priority” for deportation and his two U.S. citizen daughters should not be separated from their father.

Send a message to New Orleans ICE Field Director in support of Elvis and his family. This is our last chance to stop Elvis’ deportation!
Read the Support Letter for Elvis

I am writing as a member of the community to show my support for Mr. Elvis Cano-Morales (A#200-204-793). I understand that the New Orleans Immigration and Customs Enforcement office has scheduled Elvis’ deportation for today, March 27, 2015.

Mr. Cano-Morales has one U.S. citizen daughter of 15 months old and is expecting the birth of his second child next month. Mr. Cano-Morales’ wife and daughter depend on him for financial and emotional support. Since Elvis’ detention, his wife has struggled to work due to her pregnancy and as a result they lost their house in Kentucky.

Mr. Cano-Morales was detained at the Greyhound bus station in Louisiana, while traveling for work to provide for his family. I am aware Mr. Cano-Morales has a conviction for re-entry but he does not pose a threat to national security and  should not be considered “priority” for deportation. Mr. Cano-Morales has proven to be a loving and responsible father to his oldest daughter. Furthermore, Mr. Cano-Morales’ youngest daughter will be born next month and his wife needs his support during this difficult time.