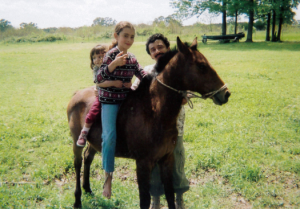 Eric Carrillo is a worker from Louisiana who survived hurricane Katrina and remained in the city to help re-build homes, including his own. He has lived in the US for 23 years and has 4 US citizen daughters who are from ages 4 to 17 years old. In August, while Eric was preparing to take his youngest to school, immigration agents came to his home, detained him, and took him to detention in front of his children.

Since he was taken away from his family, his wife and his 4 children have had to survive without his support. His oldest daughter, an honor student, has had to delay attending college in order to work to support her younger sisters. The mental health of Eric’s children has also been severely impacted, and his two youngest daughters have had to see a therapist due to the seriousness of their symptoms and changes in behavior.

Eric is being considered as “priority for deportation” by ICE due to a 17-year old criminal conviction. In 1997, when Eric was 23 years old, he was in a committed relationship with his girlfriend, who was 16. He was convicted of “sexual abuse of a minor,” which is a criminal felony. The charge is serious, however given the context and details of the case an immigration judge in 2008 found that this “conviction is not for a particularly serious crime” and pointed out that “the fact that he has coexisted in the community for the past 11 years is a serious indicator that he does not pose such a threat.”

In the last 17 years, Eric’s life has changed. He is a devout Christian and an active leader in his church in Kenner, Louisiana. He has the unwavering support from his entire congregation. The pastors, church president, and more than 20 members of his congregation have written letters of support for Erick. ICE should not treat a criminal conviction from 17 years ago as a bar to prosecutorial discretion, and must consider the individuals facts and equities. It’s clear upon review the facts in this case that there’s overwhelming evidence of Erick’s strong moral character and his children will be thrown into severe hardship due to his deportation, and Erick should be allowed to reunite with his family.

ICE has already denied prosecutorial discretion for Eric’s case, and he could be deported this Tuesday. Please sign below and make a call to make sure ICE reviews his case, and his deportation is stopped.
E-mail to Director Ragsdale and Field Director Rivera

I am writing because I am concerned with the potential removal of Mr. Erick Giovanni Carrillo-Franco (A#088-655-440), a father of four U.S. Citizen daughters, church leader, and long time community member. I would like to express my full support for his request to review his prosecutorial discretion request originally denied by the New Orleans field office. Mr. Carrillo-Franco is facing imminent deportation after ICE agents came to his family home in Kenner, Louisiana last month searching for another individual and instead arrested Mr. Carrillo in front of his children as he was leaving the house to take his young daughter to school.

Mr. Carrillo has deep ties to the United States, he is the father of four US citizen children ages 4-17 years old, he has lived in the US for 23 years, he is a devout Christian and a leader in his Louisiana church. Mr Carrillo is also a Katrina survivor and a reconstruction worker who stayed in the city after the hurricane to help rebuild it. Mr. Carrillo’s children depend on him as the primary economic and emotional provider. His arrest and possible deportation has severely impacted the mental health of his four daughters who have responded with signs of anxiety, trauma, and depression. His two youngest daughters have had to see a therapist due to the seriousness of their symptoms and behavioral changes.

I understand that Mr. Carrillo’s request for a stay of deportation was denied based upon a felony conviction from 1997. However, based on a detail review of the facts in his case, an Immigration Judge already found in 1998 that this “conviction is not for a particularly serious crime” and that “the fact that he has coexisted in the community for the past 11 years is a serious indicator that he does not pose such a threat” to the community. Given that Mr. Carrillo’s offense has been found not to a particularly serious crime and the overwhelming evidence demonstrating that he is not a threat but rather an essential member of his community, ICE should not use this 17-year-old conviction to separate Mr. Carrillo permanently from his family.

I urge you to please use prosecutorial discretion to grant Mr. Carrillo a stay of removal, release him from detention, and close his case so that he may remain with his wife and four children.