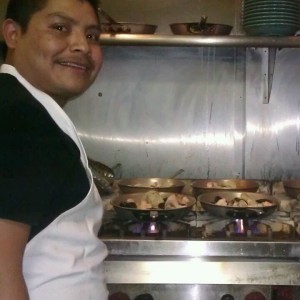 Ernesto is a farmer from Quiché, Guatemala who first came to the United States in 2005 in order to escape the increasing violence in his area, but he was detained at the border and deported. After being sent back to Guatemala, Ernesto was the victim of repeated threats and extortion by organized crime.

When he didn’t comply he was assaulted, knifed in the throat and arm, and shot in the leg, all leaving large scars. Fearing for his life, he fled to the United States again in 2007. Since then, Ernesto has lived in Rhode Island with his 5 siblings, supporting his elderly mother and his 8 year-old son.

Last year, Ernesto was the passenger in a motor vehicle that was stopped by an Immigration and Customs Enforcement agent. The agent asked everyone in the vehicle for identification and detained Ernesto based on his prior deportation. Ernesto remembers the agent saying they were going to “take his prints and let him go,” but he has been detained for 10 months at the Bristol County House of Corrections..

Ernesto has established reasonable fear of persecution if he is returned to Guatemala, and is on his way to applying for asylum. However, ICE denied a petition for release and the officer assigned to his case has told Ernesto’s lawyers that his release is has “little to no priority.” Please contact ICE today!

UPDATE: Ernesto was released from detention and remains in the process of applying for asylum.  He has a hearing scheduled for 2016.
Message to the Boston ICE Office

I am writing as a community member concerned with the continued detention of Mr. Ernesto Tipaz (A 009-462-220). Mr. Tipaz has been detained at the Bristol County House of Corrections for over 10 months. He has established reasonable fear of persecution, yet he continues to be held in custody. I am writing to express my full support for his release.

Mr. Tipaz had lived in the United States since 2005 in order to escape increasing violence in his home, but was detained at the border and removed. After being sent to Guatemala, Mr. Tipaz was the victim of repeated extortion and assaults by men he believes are involved with organized crime. Because he did not pay these men, he has been knifed in the arm and neck and shot in the leg, leaving large scars. Fearing for his life, he fled to the United States in 2007 and has been living in Rhode Island since. He is the primary economic support for his 8-year-old son and his elderly mother.

Mr. Tipaz has no criminal record, he has lived in the United States for 7 years, he is a loved member of his community, and he has passed his reasonable fear interview. I urge you to use prosecutorial discretion to release Mr. Tipaz immediately.

Georgia Father & DACA-applicant in Detention for Driving Without a License
ICE Did Not Want to Leave Empty-Handed, So They Detained Francisco, Georgia Father of Two
Comments