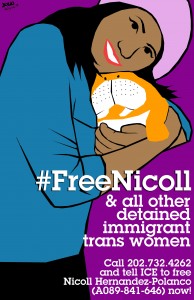 Nicoll Hernandez-Polanco (A# 089 841 646), a transgender woman from Guatemala, is currently being detained in the all-male wing of ICE’s Florence Service Processing Detention facility in Florence, Arizona. Nicoll came to the United States seeking asylum in October 2014 because she was the target of violent attacks, constant harassment, and discrimination in her country of origin.  Unfortunately, at the hands of ICE, Nicoll is now being subjected to the same treatment she seeks protection from.

In her first month in detention, Nicoll was patted down 6-8 times a day by male guards, who Nicoll reported would grope her breasts and buttocks, make offensive sexual comments and gestures, and sometimes pull her hair.  In addition to physically harassing Nicoll, ICE staff routinely verbally abuse her.  She has been called “stupid,” and “the woman with balls” in front of other detained immigrants.

Nicoll has also suffered abuse at the hands of her fellow detained immigrants.  In early December, Nicoll filed an official complaint after another detained immigrant sexually assaulted her.  A different man detained with her threatened to put her in a hole, and one told her that her throat would be slit in his country.  Now, the harassment and overt hostility have become so severe that Nicoll is afraid to leave her sleeping quarters and go anywhere else in the facility.

Nicoll’s well-being and mental health are at risk every day she remains in detention. Nicoll was recently punished and placed in solitary confinement for standing up for her human dignity. Despite requests from Nicoll’s attorneys to release her, ICE has failed to do so and continues to ignore complaints of abuse and negligence.

Please sign this petition and make a call to help release Nicoll from the Florence Detention facility so that she can get the support she needs as a survivor of sexual violence. Local Tucson LGBTQ community organization Mariposas Sin Fronteras is ready and able to support her healing.
Message sent to ICE Official

Nicoll is a transgender woman from Guatemala.  She came to the United States seeking protection from discrimination and sexual violence that she experienced in her home country.  Unfortunately, ICE has not done its job to protect her.  Since her arrival at the detention facility, Nicoll has been the victim of regular verbal abuse and sexual harassment from both detention officers and other detained immigrants.

Nicoll desperately needs support and care that she can only receive outside of ICE custody.  ICE should exercise its discretion and immediately release Nicoll from detention.

Loving father of 4 US citizen children in detention. Support Jaime, tell ICE he should be released and reunited with his family.
Parent Detained At York County Correctional Facility, Should Be Released as “Low Priority”
Comments