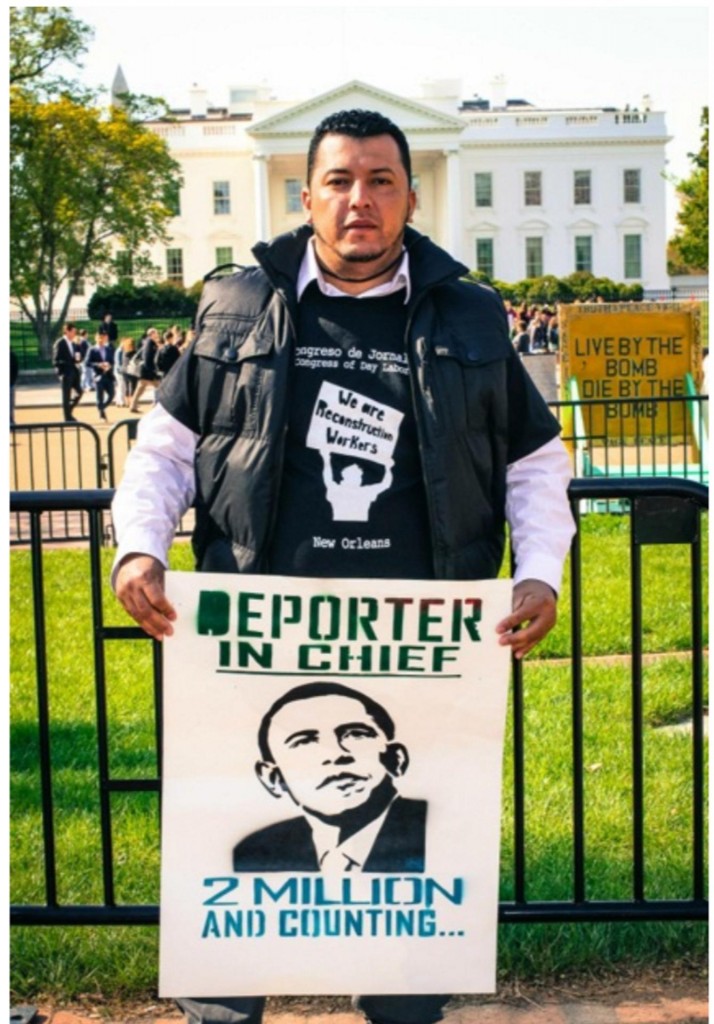 Gustavo Bonilla-Noriega is a worker, civil rights leader and labor rights advocate who has lived in New Orleans since 2004, and considers the city his home. After hurricane Katrina, he lent his skills as a carpenter and construction worker rebuilding the homes and businesses of the city.

New Orleans is also where in 2008 he met his wife and his step son, who was 4 years old at the time, and where he is raising his daughter, now 2 years old.

Gustavo has been fighting his deportation since last year, after he was stopped for a simple traffic violation and turned over to immigration. After fighting to be able to stay with his family, ICE agreed to delay his deportation for one year, until the summer of 2014.

Now ICE has stated that Gustavo will not be getting more time, and that he should “self-deport” before December 31st, 2014.

Since Gustavo was released from detention last year he has become an indispensable asset to the labor and civil rights community. He is an active member of the United Brotherhood of Carpenters & Joiners of America, Local Union No. 1846, which supports his stay of deportation. He is also a leading member at the New Orleans Congress of Day Laborers, as part of which he has fought against racial profiling in New Orleans, for the rights of immigrants in Louisiana and in Washington D.C.. As a laborer, he has also fought against wage theft and has a pending lawsuit to recover unpaid wages.

Update: Gustavo received confirmation that he has been granted a one-year stay of removal. Thanks to your support he was able to start the new year with his family and celebrated his daughter’s birthday on January 9th.

UPDATE: On the afternoon of  December 24, 2014 Gustavo got a call to schedule the removal of his ankle monitor. Although this is not a confirmation that he has been granted a stay of removal, it is a good sign. Thank you for your support.

UPDATE: On December 23, 2015 Gustavo was told that the ICE office has already made a decision, but they wont communicate with him about what that decision is. He can’t spend this christmas without knowing whether it will be the last with his family. Please sign and make a call.

UPDATE: On December 17, 2014 the New Orleans ICE office indicated that they would not close Gustavo’s case, and that he is still expected to leave the country by the end of the month. The ICE office has refused to stop his deportation even though he would be eligible for the President’s Deferred Action for Parental Accountability (DAPA) program announced on November 20th, and despite being considered “low priority” for deportation according to DHS guidelines announced on the same day. Please sign below and make a call.

[The petition has been temporarily suspended due to the recent updates. Thank you for your support]

Message to ICE in support of Gustavo

I am writing as a member of the community to show my support for Mr. Gustavo Bonilla-Noriega (A 078-308-409), a reconstruction worker and civil and labor rights leader with a pending labor dispute. I understand that the New Orleans Immigration and Customs Enforcement office has refused to stop pursuing Mr. Bonilla-Noriega and insists he must leave the country by December 31, 2014 is prima facie eligible for DAPA or non-priorities for removal under the November 20th memoranda.

Mr. Bonilla has 2 U.S. Citizen children who reside with him and financially depend on him. He meets the 5 year continuous residency. He has no criminal convictions and a prior deportation from 2006. Mr. Sevilla has no criminal history and an order from 2006. It’s disappointing that individuals who are DAPA eligible or non-priorities remain scheduled for deportation and must spend the Holidays planning to separate from families and community.

Grandfather detained during family trip to Michigan is set to be deported Tuesday!
New Jersey Grandfather Victim of Fraud to Be Deported This Thursday
Comments