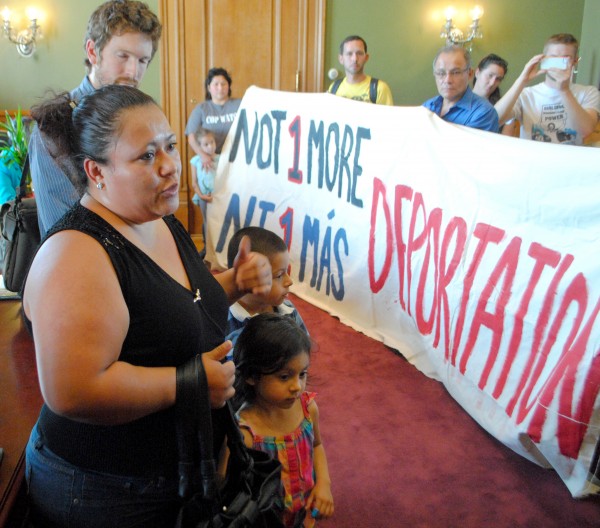 Despite this decision by Governor Chafee, the Division of Sheriffs held Gustavo after a judge ordered his release and turned him over to ICE agents, he is now at risk of deportation. Gustavo has been in this country for 15 years and is married to Amanda with whom he has 3 children. He is the sole provider for his family and his three US born children need him at home.

UPDATE: Sadly, Gustavo was deported.
Click here to read the message being sent to Governor Chafee in support of Gustavo

I am writing to register my extreme dismay that, despite your recent “ICE Detainer Policy,” Rhode Islanders continue to be unfairly held and sent to ICE on immigration detainers.  Your July 17th order prohibited the RI Department of Corrections from detaining an individual pursuant to an ICE Detainers absent a “judicially issued warrant of arrest.”  The policy has already had an enormous impact, and individuals who had been held on ICE detainers have already been released.  I congratulate Rhode Island on passing the most expansive statewide detainer policy in the country.

However, I am alarmed that the Division of Sheriffs, another executive agency under your command, has now begun detaining individuals based solely on ICE holds and transferring them to ICE custody.  This occurred on Friday July 25th at 6th District Court in Providence. Gustavo Arroyo, a husband and father of three, was arraigned and ordered released on personal recognizance.  Instead of being released to his family, however, the Sheriffs detained Mr. Arroyo and attempted to remand him to the ACI.  When the Department of Corrections refused to take custody of Mr. Arroyo — pursuant to your order — the Sheriffs called ICE and had them pick up Mr. Arroyo directly from the courthouse.

This is completely unacceptable.  The current situation simply displaces enforcement of an unjust policy from one state agency to another; it does not end the practice of ICE hold detentions.  RI should not be in the business of detaining individuals without probable cause, in violation of their constitutional rights.  I urge you to amend your July 17th order to include all state agencies, particularly the Division of Sheriffs.​