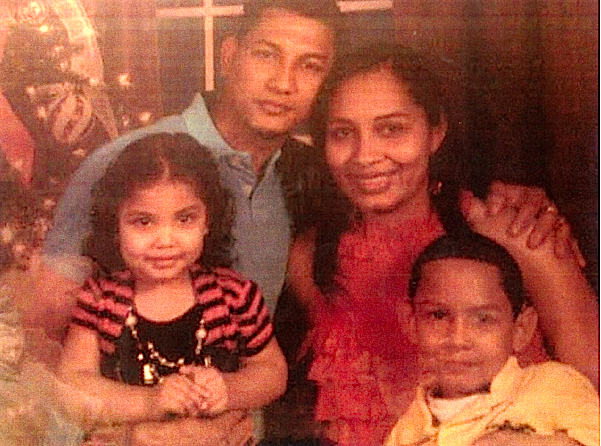 UPDATE: Thanks to pressure from the community, Hector was released and granted a 3-month stay of removal. It expires on June 5th, 2014. Please continue to sign below.

On November 11, 2013, Hector Danilo Ruiz and his family were heading to attend their weekly bible study group, held in the home of another parishioner. As he was driving into the apartment complex, he was followed by an unmarked car, and as they entered the home where the bible study was taking place, ICE agents followed them. Several immigration agents entered the home and asked several of the men for their identification. Hector was handcuffed and detained while his children – 6 and 4 years old –  and wife watched from the parking lot. S

Hector’s detention is the second that took place at a bible study group months in New Orleans. These actions by immigration are part of a new initiative under the Obama administration called the Criminal Alien Removal Initiative, being piloted in New Orleans. Under CARI, ICE agents in New Orleans have also arrested a father dropping off his 5-year-old U.S. citizen daughter at the school bus stop, pushed and handcuffed a 16-year-old U.S. citizen boy for asking questions about his father’s arrest, and joked about “going hunting” while driving around New Orleans in search of Latinos to handcuff and fingerprint even before questioning.

Since he was released, Hector has helped to speak out about the unconstitutionality of this program and for the rights of immigrant communities, including providing testimony for NDLON’s Rulemaking petition to DHS and the ground-breaking report on the CARI program by the New Orleans Center for Racial Justice.

Although Hector has now been released, his stay of removal expires on June 5th. Please help stop Hector’s deportation and keep him here with his family by signing below.

I write to you in support of Mr. Hector Danilo Ruiz (A# 098-556-377), who is facing deportation from the United States. Mr. Ruiz is the father of two United States citizens, one who is 6 and the other who is 4 years old. Mr. Ruiz has lived in the United States for 9 years, has deep ties to his community, and has never been convicted of violent crimes. He is a

Mr. Ruiz is the father of 2 children, Hector Ruiz-Mendoza, who is 6 years old, and Angie Ruiz-Mendoza who is 4 years old. He is his family’s sole provider, as Ms. Mendoza, his wife, makes very little money as a baby sitter. Without his income, Mr. Ruiz, his wife, and his children run the risk of losing their home. In addition, Mr. Ruiz’s detention by Immigration and Customs Enforcement (ICE) on November 11, 2013 as the family was heading to their bible study group, has been extremely traumatic for his children. Their changes in behavior have affected their mental health and behavior at school, leading their mother to take them to see their pediatrician.

I understand that there are some negative factors affecting the consideration for prosecutorial discretion for Mr. Ruiz, including a prior deportation from 2012 and a plead for disturbing the peace from an incident in 2007. However, he has paid the fine and court costs in full, and he is not a threat to public safety or national security. In addition, Mr. Ruiz is an honest worker, a responsible father, and a church-going man with good moral character. However, I believe that the positive factors in his case outweigh the negative. Mr Ruiz’s deportation would create a tremendous hardship for his United States citizen children, Hector and Angie. In addition, Mr. Ruiz has strong ties to his community, and has made positive contributors to New Orleans. In this spirit, I urge you to consider Mr. Ruiz’s request for prosecutorial discretion to stay his deportation.

Domestic Violence Survivor Calls Police and is Detained, Could Be Deported
Stop Juan’s deportation! Let him go home to his daughters and wife!
Comments