share
Two Palestinian refugees who have been determined to have “credible fear” if deported face indefinite detention. One of them could be deported at any time, the other remains in limbo.

In 2010 and 2011, Hisham Shaban Ghalia and Mounis Hammouda fled continued violence and poverty in Gaza–part of the Israeli-occupied Palestinian territories in the Southeastern Mediterranean. Over that time, both men migrated undocumented through at least eight countries between the Middle East, Europe, as well as South and Central America before arriving at the US-Mexico border to request humanitarian asylum in November 2014. An October 2015 article in UK Guardian has documented their part of a large wave of Middle East and African refugees/migrants moving through Mexico since 2011.

Since Hisham and Mounis’s arrival at the US-Mexico border one year ago, they have been detained in Florence, Arizona.  Even though both men were determined to have “credible fear,” the first step in claiming humanitarian protection from persecution, they are still being held in indefinite detention.

Immigration authorities have denied Hisham’s asylum claim and have issued a final order of removal, but are unable to deport him due to restrictions that prevent US immigration authorities from dealing directly with the Palestinian authorities. Therefore, although both men meet “low priority” criteria under the Department of Homeland Security’s own standards, they remain in limbo, and subject to indefinite detention.

Both men potentially face further imprisonment or death if deported to Israel or Saudi Arabia, where Hisham was born to a Palestinian refugee family but lacks citizenship or residency, Currently an anti-occupation uprising is searing the West Bank and Gaza, where between Oct. 1-Nov. 8 alone Israeli police and military have killed at least 79 Palestinians and injured more than 3000.

In partnership with Students for Justice in Palestine (University of Arizona Chapter), Sun Devils are Better Together, No More Deaths, MPower, Puente, & Not1More. 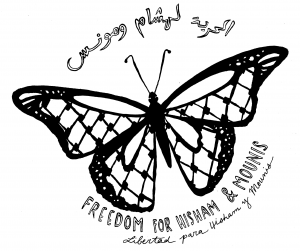 There is no reason to keep these two men in detention.

Send an email to ICE demanding that they free Hisham and Mounis!

I am writing in support of Hisham Shaban Ghalia (A#202-013-155) and Mounis Hammouda (A#202-013-156). They are both asylum seekers from Palestine who have been granted credible fear and so should be released from detention immediately.
Hisham and Mounis fled Gaza four years ago due to very real fear for their lives due to continued violence and poverty. Both men are considered low-priority for deportation according to ICE’s own standards. As asylum seekers already granted credible fear, I urge you to release them immediately.
Furthermore, a humanitarian aid-based community in Tucson, Arizona welcomes Hisham and Mounis to support their ongoing needs. 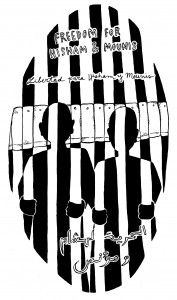 Stop the Deportation of Olivia, Venecia, and Christina Now!
Father of three facing deportation after being wrongfully accused of robbery
Comments