Jose Parra, Loving Father, Faces Deportation for Crossing the Border: Not One More! 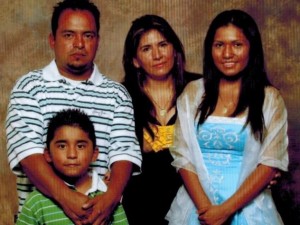 Unfortunately, Jose was deported. Please go to notonemoredeportation.com to support other people in detention.

The “Dream 9”, nine dreamers who returned to the U.S. from Mexico in an unprecedented public action, are detained in Eloy. While their bravery is making headlines, they aren’t the only ones detained just for crossing the border. Jose Alfredo Parra Sanchez (A#079042767), the loving father of a critically ill child, is also detained in Eloy only because he has a prior deportation.

Jose Parra, 34, has been in the U.S. for 11 years and has no criminal charges. He has always worked hard to support his son and stepdaughter. His son, Luis, 10, has survived surgery for severe medical conditions. He should have to endure the further trauma of losing his dad.

ICE wants to deport Jose because he returned to the U.S. to raise his children. Returning through the desert is an example of Jose’s commitment to being a loving and present father. Don’t tear this family apart again! Luis shouldn’t have to deal with the fear of his dad’s deportation.

Loving Father of Five to be Deported for Expired Vehicle Registration: Stop Separating Families!
Joan to Be Deported Days Before His Baby is Born
Comments