Stop Juan’s deportation! Let him go home to his daughters and wife! 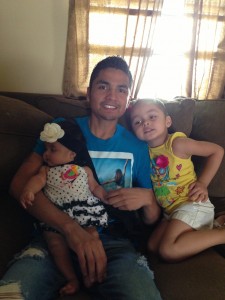 Juan was released on supervision this week of Nov 19th 2013! thank you all and please support the rest of the people fighting to stop their deportation. The following message is from Sonia, Juan’s wife:

Thank You to everyone who signed our public petition and called ICE. Juan was supposed to be deported but at the last minutes his deportation got canceled. He’s been released and back home with his family. Please keeping supporting more cases like Juan’s case. No family should be taken apart. Once again thank you for all the support.

Juan Paulo Galindo is a twenty four year old husband of a U.S. citizen and father to two U.S. citizen little girls.  He has been living in the United States for the past six years. In those six years Juan has been able to get his high school diploma. He also has dedicated his time working and providing for his family. One of his daughters has Plagiocephaly (flat head syndrome) and may require wearing a helmet on her head to reshape her head. He has no criminal record here in the United States. He’s the type of person who will do what ever he can to help somebody out. Juan deserves to be here in the United States with his family.

Please grant Mr. Galindo-Rodriguez’ stay of removal so he can come home to his wife and daughters.