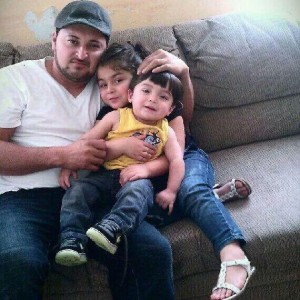 Justo and his wife Yesenia were picking up their 7-year old daughter from the Houston airport when they were both detained by US Customs and Border patrol agents, and placed in immigration detention. When both were detained simultaneously, this left their daughter Yesidali and her 4-year old brother, Christopher, without any knowledge of where their parents were or whether they would see them again.

Yesenia is back with her children after the New Orleans Congress of Day Laborers advocated for her release, but Justo remains detained and could be deported at any moment.

Justo has lived in the U.S. for over 13 years and has been with his partner and mother of his two children for over 10 years.  He has no criminal convictions and poses no threat to the safety of the public. To the contrary, Justo is a hard worker and provider for his family.

Justo’s two young children are suffering greatly in his absence. In a letter to ICE, Yesenia writes that the children believe that they have been “abandoned by their father” and have had increasing behavioral and emotional problems. Justo is also the family’s primary provider, responsible for covering all of his family’s expenses. Since his detention, his family has had to move from their home to a single room at a friend’s apartment.

Justo’s case is not an easy one. ICE has flagged Justo for immediate removal based on a prior deportation order from 2002 and subsequent deportation from 2008.  After he was deported, Justo returned to the U.S. at the request of his wife, who was struggling to take care of their infant daughter alone.

Justo also has an arrest from 2006, with a charge for driving while intoxicated. He was released on bond and told he would receive a court date in the mail, which he never did. Yesenia was 3 months pregnant at this time with their first child, and Justo’s sole preoccupation during this time was emotional and economic support to his pregnant wife. He has not yet been arraigned for the pending charges and plans to plead not guilty if he is given the chance. Justo has not been arrested in the 8 years since this charge, and has proven to be a contributing member of his community.

Please sign below to send a message to the ICE Field Office in Houston saying that they should exercise prosecutorial discretion to release Justo, stop his deportation, and allow him to be back with his family.

Letter to Houston ICE Field Office in support of Justo

I am writing as a member of the community regarding the detention and potential deportation of Mr. Justo Adalid Milla-Mendoza, A 079-712-537. Mr. Milla-Mendoza is currently detained and it is my understanding that due to a prior removal he could be deported any moment. However, Mr. Milla-Mendoza is a dedicated parent of 2 U.S. citizen children who are 7 and 4 years old, he has lived in the United States for over 13 years, he has no criminal convictions, and has deep ties to his community. In addition, he has wide-spread support from community organizations and the public, including myself, in order to stay with his children. I urge you to please use prosecutorial discretion to allow Mr. Milla-Mendoza to remain in the United States with his family and grant him a stay of removal.

Mr. Milla-Mendoza was detained on August 9, 2014 at Houston’s George Bush International Airport where he was awaiting his young daughter who was returning from Honduras. U.S. Customs and Border Protection detained Mr. Milla-Mendoza, along with his partner, Yesenia Nunez-Amador. Both parents were detained simultaneously, which has disrupted the rights of both parents. Although Ms. Nunez-Amador has been released, Mr. Milla-Mendoza’s continued detention has been extremely traumatic to their children.

I understand that Mr. Milla-Mendoza returned to the United States after being deported in order to continue to support his family. I am also aware that Mr. Milla-Mendoza has prior arrests, all of which were either rejected or dismissed, except for a driving while intoxicated charge from 2005 or 2006. It is my understanding that he has not been arraigned for this charge, and seeks the opportunity to plead ‘not-guilty’ and exercise his right to due process. I understand that Mr. Milla-Mendoza’s prior immigration history and arrest will be important factors in your decision of whether to exercise discretion in his case. I believe, however, that the positive factors outweigh any negative factors in his case. I urge you to consider Mr. Milla-Mendoza’s request that ICE use its prosecutorial discretion to grant him a one-year stay of removal, deferred action status, and release him from immigration detention.