Mario de la Rosa came to the United States seeking medical treatment for his son Alejandro, since doctors in Mexico said he would not be able to live and were unable to diagnose him. In March 1997, Mario crossed the border undocumented to begin work so that he could support his family when they arrived. To reunite with Mario and save her son’s life, Alejandro’s mother carried him across the desert to be with Mario so that together they could provide Alejandro the medical care he requires.

In February 2011, Mario was returning home from work when he was pulled over by the Waukegan Police Department for driving with a broken taillight. Rather than being issued a citation, Mario was detained, turned over to immigration authorities and subsequently placed in deportation proceedings.

Deporting Mario jeopardizes Alejandro’s life as he would lose access to the life-saving medical care he requires. Additionally, Mario’s daughter, Izamar, considers the U.S. her home as she has lived and attended school in the United States since she was six years old. Her application for deferred action for childhood arrivals is currently pending. 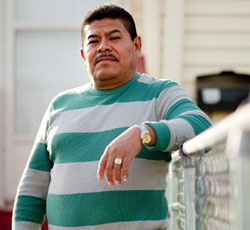