He Has Supported Her Through Health Crisis, Now She Fights to Stop His Deportation 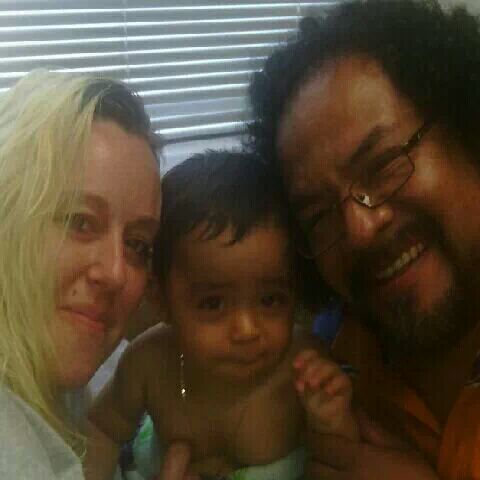 Michelle met Miguel Angel Manrique four years ago, while she was going through a tough time in her life. She remembers that when she was getting out of the hospital after a suicide attempt, he went to her and told her she would not have to go through it alone. Together, they have survived and were raising two children, including a one and a half year old U.S. citizen, Gio.

One morning in September of 2013 immigration agents came to their home, and apprehended Miguel in front of his family. Michelle remembers their daughter crying on the floor, and Miguel asking the ICE agents if he could get his glasses, only to hear the reply “Don’t worry. You’re not going to need those where you’re going.” Miguel’s last words to her were, “It’s going to be okay.”

Although his case is difficult, with three stops at the border and a prior deportation after trying to get a driver’s license, Michelle is determined to stand by her husband, just like he has stood by her, and is fighting to stop his deportation. Please send an e-mail to ICE in their support, and keep this family together!

His son is one and a half years old and was born 5 weeks early, due to Ms. Manrique suffering from pre eclampsia, a medical condition that can be life threatening for the mother and fetus. He lives with asthma and has severe respiratory problems. According to his mother, he has had to go to the emergency room at least 2 times since he was born. In addition, Ms. Manrique also suffers from various and severe health problems. She suffers from a blood clotting disorder, two pulmonary embolisms, two fused vertebra, low thyroid function, arthritis, and requires surgeries for a madelung deformity. Ms. Manrique also requires mental health support. She suffers from attention deficit disorder, panic attacks, social anxiety, severe depression and borderline mood disorder. When she attempted to commit suicide in the past, for which she has been hospitalized twice, it was her husband, Mr. Manrique Valdes that supported her through the crisis.

Mr. Manrique Valdes came to the United States over 15 years ago and has made the United States his home. He met and married his wife four years ago. His immigration and criminal record all stem from not having legal documentation in the United States, and trying to survive with his family. I understand that he was deported 10 years ago after attempting to get a Driver’s License, and that he was stopped at the border. None of these are actions that create a public risk or a threat to national security, and all are related to his immigration status. Mr. Manrique Valdes has attempted to fix his immigration status after marrying his wife, but he has not been successful. Yet his family needs him and is undergoing extreme hardship without him.

I ask you to please consider using prosecutorial discretion and releasing Mr. Manrique Valdes from immigration detention, and closing his immigration case.

Thank you for your attention,

Immigration Agents Beat Fernando in Detention. Will they Deport Him Before He is able to hold them accountable?
White House Has Edgar’s Case to Review But ICE Still Threatens Deportation at Any Time
Comments