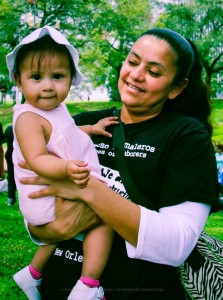 Modesta was nearly deported but she decided to fight, not just for herself, but for her daughter and for her community. Through her efforts, Modesta won temporary relief and has become an outspoken advocate for civil and migrant rights. In the past few years, she has testified in front of the United States Human Rights Network, Mayor Landrieu, and the New Orleans City Council to raise awareness about civil and migrant rights in New Orleans.

However, now ICE has demanded that she present with her plane ticket to self deport on Tuesday, January 19th.

Modesta is eligible for the President’s Deferred Action program for parents of U.S. Citizens (DAPA) and is an 8 year resident of New Orleans’ Mid-City. Modesta followed her husband, a Katrina reconstruction worker, to New Orleans and herself worked in the clean-up and reconstruction effort. She is not an ICE priority for deportation, yet the New Orleans ICE office refuses to give her a reason as to why she has been asked to self-deport.

Modesta is terrified to show up on Tuesday without a ticket, yet the ICE office has still not answered her request for Prosecutorial Discretion that was submitted on November 17th of last year!

UPDATE: Thanks to your calls Modesta will not be deported and is being granted prosecutorial discretion.
While I’m glad to deliver this happy news going into the weekend, we must keep in mind how, even for a cut and dry case like Modesta‘s–a person who exemplifies the type of person who President Obama says we should not deport– a favorable decision was not easy. Modesta has had to fight. The community had to express concern. It is a important reminder that we can not simply trust ICE to make the right decision on their own, and we have to speak up when we don’t agree. So again, thank you all for your support, and lets keep winning!!

Sample script: Mr. Acuna, My name is ______________, and I’m calling in regards to the case of Ms. Modesta Medina. You have asked Ms. Medina to self deport even though she is a DAPA eligible mother and civil rights defender. I understand that she submitted a request to your office for prosecutorial discretion nearly two months ago which remains unanswered, even though your office has told her she must bring a plane ticket by this Tuesday. We are concerned about the lack of use of discretion in this case and urge you to answer her request before her deadline to bring the ticket on Tuesday.