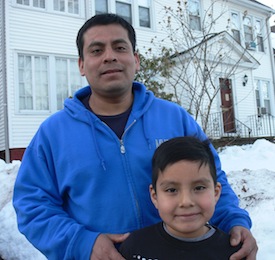 Jose Maria Islas (A# is 205-497-397) is a cherished member of the New Haven, Connecticut community. He has lived in New Haven with his family for 8 years. He was ensnared by Immigration and Customs Enforcement (ICE) after police arrested him in a case of racial profiling and mistaken identity outside the factory where he has worked for many years.

Jose Maria was on a lunch break near his work when police arrested him, looking for two Latino men who allegedly had tried to steal a bicycle. After Jose Maria spent four months in jail, the judge concluded that it was a case of mistaken identity. The charge was reduced and then dismissed, but now he is in deportation proceedings.

ICE says that he is a “priority” for deportation, because in 2005, as he was trying to enter the United States, he was caught and returned several times by border patrol. These are civil, not criminal, infractions, and Jose Maria was coming here like so many millions to provide for his family and reunite with his sister.

Jose Maria has no criminal record, and he is known in his church and in the community for his activism and service. He should be allowed to stay with his family and continue contributing to the New Haven community.

Please sign the petition below and call to ask ICE to use prosecutorial discretion and stay his deportation.