Not one more victim of Arpaio deported! Free Rafael!

RAFAEL WAS RELEASED 7/10/13 because of community support!

Rafael Andrade Sanchez (A#205587563) lived and worked in the U.S. for 18 years before he was swept up in one of Arpaio’s unjust workplace raids. A federal court declared these raids racially motivated and unconstitutional, yet ICE still intends to tear Rafael from his ho 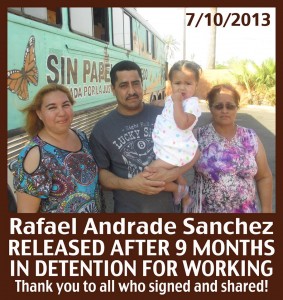 me and community for work-related charges.

Rafael has no criminal history and no prior deportations. He is a loving step-dad and kind neighbor who takes care of his community in Phoenix. He often puts in extra hours at the construction site to cover the costs of medication for Sister Maria, an elderly friend and religious mentor. He also volunteers at Amigos Center, a community organization and boys and girls club.

Working to help the community is admirable, not criminal. Rafael has already been held for 9 months, and could be deported this week.