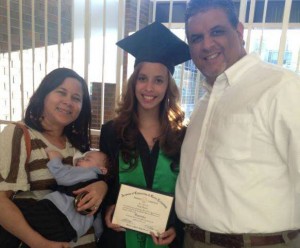 Pedro Linares (A 205 015 337) is a loving father who has lived with his family in Hartford, Connecticut since 2007. The Hartford ICE office has moved to swiftly deport him for overstaying a visa, in a clear violation of DHS mandates that parents of US citizens and legal permanent residents should not be a “priority” for deportation. President Obama must act so that local ICE offices stop detaining and deporting community members who are eligible for relief.

Before Pedro was detained without warning during a regular check-in at the ICE office, he was eagerly awaiting the birth of his second grandchild. His daughter who is expecting the baby has been overwhelmed with stress, and his sons who are students at Buckley High School have not been able to focus on their studies.

Pedro also was in the process of legalizing his status through an I-130 spouse petition, because his wife is a US citizen. His three children, with whom he is very close, are legal permanent residents, and he also provides for his two US citizen step children from his second marriage. Pedro is facing deportation simply because he overstayed a visa and not because of any criminal convictions.

We ask ICE and the White House to ensure that Pedro be released from detention immediately and granted prosecutorial discretion.

Can you take a minute to send a message in support of Pedro? ICE has moved him to a prison far from his family and plants to deport him as soon as March 14. Every signature and call to ICE makes a difference.

I am writing in support of Mr. Pedro Linares (A 205 015 337) to urge you to use prosecutorial discretion to stop his deportation, which is scheduled for March 14, 2015. As a father of three legal permanent resident (LPR) children with no criminal record, he is the “lowest priority” according to the DHS memo dated November 20, 2014 entitled Policies for the Apprehension, Detention and Removal of Undocumented Immigrants.

Mr. Linares has lived with his family in the US for over 7 years, has no criminal record, and is not a danger to the community. Mr. Linares is exactly the kind of person whom DHS priorities are supposed to protect. He is the economic provider for his three LPR children and two US citizen stepchildren. He also should be able to obtain legal status through his pending I-130 spouse petition, because his wife is a US citizen.

I urge you to reconsider Mr. Linares’s application for stay of removal, which was denied by the Hartford ICE office on February 23, 2015. Your immediate action is needed, since we understand that Mr. Linares has been transferred out of Suffolk Detention Center (Boston) and may be deported as soon as Saturday, March 14, 2015.

Father of Two To be Deported This Friday for 10-Year Old Misdemeanor
Father of 3 US Citizen Children Facing Deportation, Release “Chuy”
Comments