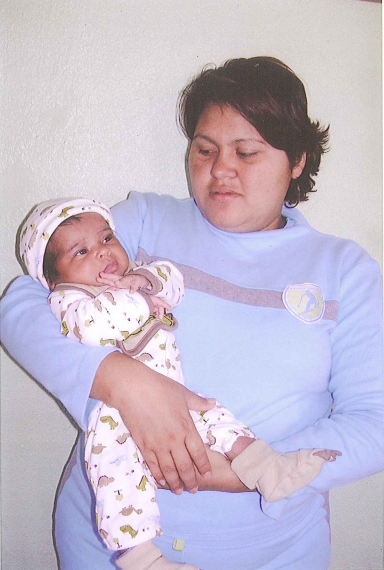 UPDATE: Despite overwhelming community support, Sandra was deported to El Salvador. She left behind her son, Barck, who is currently living with his father in California. Thank you for your calls and e-mails.

Sandra Elizabeth Borja Armeo (A# 088 343 529) is currently detained at the El Paso Immigration and Customs Enforcement Processing Center in El Paso, Texas, with a final order of deportation. According to ICE, she could be scheduled for deportation any day.

Sandra has lived in the U.S. for 6 years, and is mother of 3 year old Barack, who is a U.S. citizen. In 2011, she decided to leave the country to see her mother one last time, who was dying of cancer. During this trip her own family put her in the hands of human traffickers. She escaped, and underwent medical care in Mexico and filed charges against them. But when she was trying to return to see her son in California, she was stopped by Border Patrol and placed in detention.

Sandra’s partner and Barack’s father, Juan Jose Mangandi, is a day laborer and community theater director in California who last summer traveled with the ‘UndocuBus’ sharing his story and experience with communities across the country.

Juan and Barack are asking for your urgent support. Please sign below to send immigration officials an e-mail in support of Sandra.

I write in support of Ms. Sandra Elizabeth Borja Armeo (A# 088 343 529), currently detained at the El Paso Immigration and Customs Enforcement Processing Center in El Paso, Texas. I urge you to consider using prosecutorial discretion, and releasing Ms. Borja Armeo from immigration detention and closing the case against her.

Ms. Borja Armeo has lived in the U.S. for 6 years, and has deep roots in her community, including a US citizen son; she has no other criminal convictions in the U.S. or in her country of birth; and has little connection to her home country and her family. Additionally, Ms. Borja Armeo was trafficked by members of her own family residing in El Salvador and Mexico. She is a victim of human trafficking and has undergone psychological and medical therapy for her experiences.

I am aware that Ms. Borja Armeo’s re-entry conviction will be a negative factor in consideration of prosecutorial discretion. I understand that she left the country to visit her sick mother, who was dying of cancer. However, I believe that the positive factors in her case outweigh the negative factors. Ms. Borja Armeo is the mother and primary care-taker of of a 3-year-old United States citizen son, has no criminal record in the United States or in her country other than the one relating to her immigration status, is a victim of violence and trafficking by members of her own family, and has strong ties to the community. In addition, Ms. Borja Armeo and her family are in the process of seeking legal counsel regarding an asylum application.

Thank you for your attention on this matter.