A breathless morning
and a pair of tired eyes.

The sky soaked itself
in old rituals of today,
it hasn’t cried in a few weeks;
the land is getting thirsty.

The air swings curls forth and
parts of then tangle to the breeze.

I’ve walked up this street, countless times,
seen the same face of the mountain—cold—frozen,
I name the parts of me that I let go:

Beautiful like supernovas of the wasteland,
tattooing the images of us on my chest:
The moon is red and radiant like lips that only
know prickly pears and citric kisses,
mouthing the words of dried up rivers,
of skeletons beneath gravel.

The Caravan moves on.
The wind sleeps.
The sky is rinsing itself.
The smoke of lungs released.
The laughter echoes.
The scars of man-kind bleed.
The officer has a warrant.
The horizon sweats.
The moon dances.
The immigrant hides his reality, his wife weeps.
The times are twisted.
The sun sings farewell.
The music like thunder and
the air swings curls forth and
parts of then tangle to the breeze.

Say: don’t go.
Respond: it’s too late,
they are after me.

About the Poem: A poem written in the course of several weeks during coordinated Immigration officer raids in my neighborhood, I began to think about who deportations really affect. Mixing different emotions, different times and different images to obtain a central truth: it’s time we stop what is hurting our communities and our families the most, deportations.

About the Author: Enrique García, born in Salt Lake City, is a bilingual Spoken Wordist who writes about his Chicano experience in the American Southwest, incorporating raw imagery and intricate
metaphors; he combines a sense of identity and symbolic meaning to the words brown in America. Enrique is also of African ancestry, referring to himself as Afro-Chicano; drifting between the Afrocentricity of his Rastafari spirituality and the Mexican customs inherited through his migrant parents. Enrique advocates for Immigration Reform, equity in developing communities, same-sex marriage, minority unity
and mobilization for change. His influences are South African activist Stephen Bantu Biko, African-American poet Gil Scott-Heron, the Afrocentric MC’s of the 1990’s, Mestizo poet Octavio Paz and all the beauty of the Southwest desert holds in her hand. 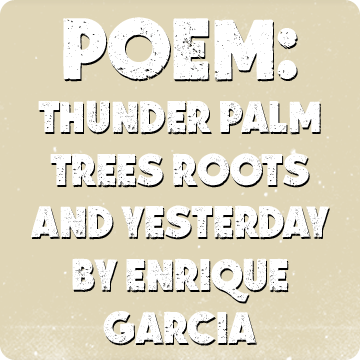