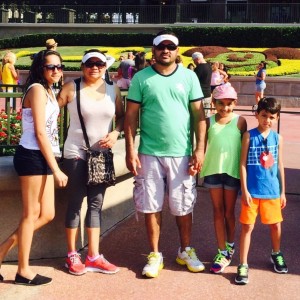 Walter Alonso Vallencillo-Andino has lived in the U.S. for 10 years. He lives in New Orleans, and after the devastation of Hurricane Katrina, he helped rebuild homes, schools, and buildings in the city. He has three children, 15, 7, and 9 years old.

One morning in late May, before the sun rose, immigration agents conducted a raid at his home.

During the raid, an ICE agent repeatedly interrogated one of his children, and arrested Walter’s partner, threatening them with the deportation of both parents and being placed in foster care.

With the support of the New Orleans Congress of Day Laborers, Walter has filed a complaint with the Department of Homeland Security’s Office for Civil Rights and Civil Liberties (CRCL) about civil rights violations from the raid, and is a key witness pending the investigation.

Walter’s children and partner have suffered great emotional distress due to the manner of Mr. Vallecillo-Andino’s arrest and subsequent separation from their father. All three children are in need of psychological assistance through a child psychologist due to severe behavior changes.

ICE originally raided Walter’s home using a DWI conviction as justification, however, that conviction was expunged. Walter is not a threat to national security or public safety, but a father and partner who is desperately needed in order to bring back emotional and financial security to his family and community.

UPDATE: On June 19, 2015 the New Orleans ICE office agreed to release Walter. He will continue to fight his deportation from outside detention. Thank you for your support.
Letter to New Orleans ICE Office

I write to you as a concerned member of the community regarding the detention of Mr. Walter Alonzo Vallecillo-Andino (097-742-346). Mr. Vallecillo-Andino has lived in the United States for approximately 10 years, has deep ties to his community, and is the primary provider for his partner and three young children. I urge you to consider using prosecutorial discretion in his case, and allow him to stay with his children.

In addition, it is very disconcerting to hear that one of the ICE officers that raided Mr.Vallecillo-Andino’s home questioned his children, and threatened one of them with the deportation of his parents and placement in foster care. I am aware that Mr. Molina has filed a complaint with the Department of Homeland Security’s Civil Rights and Civil Liberties commission due to the manner of his detention, and the actions of one of your field officers.

I am aware that Walter has a DWI conviction, however, that conviction was expunged. It is very clear that Mr. Vallecillo-Andino is not a threat to national security or public safety, but rather a father and partner who is desperately needed in order to bring back emotional and financial security to his family and community, in addition to being the witness of a civil rights violations by New Orleans ICE agents.  I respectfully urge you to consider the totality of the circumstances in Mr. Vallecillo-Andino’s case and consider the severe hardship his deportation would cause to his family and community. Mr. Vallecillo-Andino is a valuable member of our community and has widespread support from family and loved ones.

Loving Father Faces Deportation Despite Threats on his Life
3 Children, Mother, Evicted from Home After Father was Detained by ICE
Comments