On the morning of Wednesday September 28th, Color of Change, the Black Alliance for Justice Immigration, and members of the #Not1More Campaign rallied at the Department of Homeland Security to demand the DHS follow the example of the Department of Justice and cancel its contracts with private prison companies that run a majority of its immigrant detention centers.

The coalition delivered over 200,000 petitions collected by Color of Change, BAJI, Mijente and the #Not1More Campaign, CREDO, ACLU, Presente, Daily Kos, and America’s Voice as well as an organizational letter from Detention Watch Network with over 350 organizations co-signing.

After the delivery event, the detainees confronted DHS Sec. Johnson on the street in DC with Cindy Barrientos imploring for the release of her son Wilhen who has spent more than a year in detention despite his three other siblings all having already being granted asylum.

Durham, NC teachers celebrate the forthcoming release of Wildin Acosta and call for the immediate release of the remaining detained students and the dismantling of ICE

We, as members of the Durham Association of Educators, are writing today to lift up the importance of community-based organizing coupled with legal support. After 6 months in detention, our student Wildin Guillen Acosta is finally scheduled to come home to Durham. At the same time, at least 9 other NC and GA youth remain detained in Georgia and so we call for the immediate release of these young people.

Last night, Wildin’s lawyer confirmed that the Judge had cancelled the full bond hearing and granted the $10,000 stipulated bond without the hearing.

END_OF_DOCUMENT_TOKEN_TO_BE_REPLACED

After Years of Prolonged Detention and Abuse, Bangladeshi Detainees Would Return to Imminent Danger of Imprisonment, Disappearances, and Death

March 24, 2016 – New York, NY
Immigration authorities have begun transporting South Asian detainees to Florence, Arizona, as a staging ground for impending mass deportation. Many of the Muslim migrants from Bangladesh being transported were participants in the #Freedomgiving hunger strikes at the end of 2015 that roiled a dozen detention centers across the country and brought attention to the prolonged, unjustified, and discriminatory detention of Muslim and South Asian migrants. END_OF_DOCUMENT_TOKEN_TO_BE_REPLACED

Stating that it was responding to issues raised by advocates, the DHS Office of the Inspector General announced it would be doing surprise inspections at immigrant detention centers and reporting its results to the Department, Congress, and the public.

Advocates say that announcing something as basic as unannounced inspections exposes the current lack of oversight in the system that detains an average of more than 30,000 people daily and cite the OIG’s own history of corruption as a cause for skepticism.

“DHS has shown time and again that it cannot police itself,” explains Marisa Franco, Director of the #Not1More campaign. “Detainees organizing hunger strikes and work stoppages inside have been alerting the nation to the five-alarm fire of abuse inside detention facilities and DHS is responding with a squirt gun.”

Citing the rampant abuse of transgender detainees, suspicious deaths at Eloy, and other facilities, medical neglect, retaliation against hunger strikers, and the continued insistence on detaining mothers and children despite being out of compliance with federal court orders, advocates say any report done well will outline a detention system that requires not just reform but a dismantling of the detention system that mirrors the efforts to reduce incarceration in the criminal justice system.
###

Started by 110 detainees and expanded to 150, 39 are continuing the strike at Krome, South Texas, and Aurora facilities at last count. END_OF_DOCUMENT_TOKEN_TO_BE_REPLACED

END_OF_DOCUMENT_TOKEN_TO_BE_REPLACED


The day after protests prompted comment from all three democratic presidential candidates with Sanders and O’Malley issuing support, an ICE supervisor visited the 37 asylum-seekers who started the #freedomgiving hunger strike.  The meeting led to the detainees temporarily ending their strike under the agreement that anyone waiting for travel documents will be released within two weeks and ICE will honor its protocol, releasing all pending cases on parole. END_OF_DOCUMENT_TOKEN_TO_BE_REPLACED

“Generic pledges of future positions are inadequate when there are people in detention literally starving to be free right now.” – Fahd Ahmed, Desis Rising Up and Moving (DRUM)

Citing that leading Democratic candidates have made promises of reform in the future, #Freedomgiving hunger strike supporters rallied at Hillary Clinton’s office yesterday demanding that she and the other candidates speak out on the current crisis in detention.

Before the rally, Fahd Ahmed, executive director of Desis Rising Up and Moving explained, “People seeking safety in the US who instead find themselves locked behind bars have refused their meals for the past week. The fact that they have not been released after as much as two years in detention is a failure of the immigration system. If the candidates don’t speak out on their behalf we are also witnessing a failure of humanity. Bernie Sanders started a petition for refugees coming to the US but what about the ones already in detention here?” END_OF_DOCUMENT_TOKEN_TO_BE_REPLACED 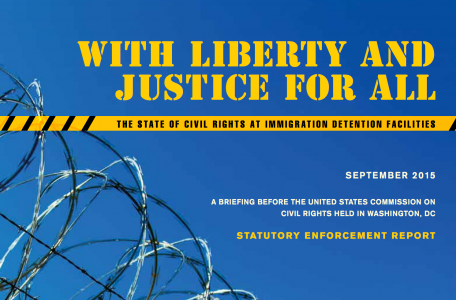