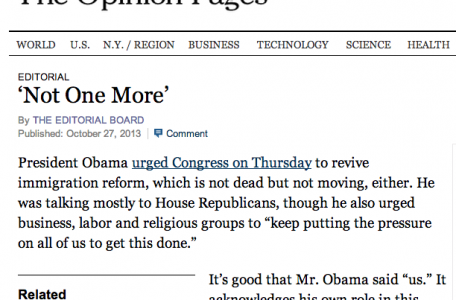 President Obama urged Congress on Thursday to revive immigration reform, which is not dead but not moving, either. He was talking mostly to House Republicans, though he also urged business, labor and religious groups to “keep putting the pressure on all of us to get this done.”

It’s good that Mr. Obama said “us.” It acknowledges his own role in this continuing disaster.

Much of the responsibility to fix what Mr. Obama calls the “broken immigration system” lies within his own administration. He can’t rewrite immigration laws, but he can control how well — or disastrously — they are enforced. He can begin by undoing the damage done by his Homeland Security Department. Mr. Obama has just nominated Jeh Johnson, a former Defense Department general counsel, to replace homeland security secretary Janet Napolitano, who resigned in July. It’s the perfect opportunity for a fresh start. Here is what it might look like:

STOP NEEDLESS DEPORTATIONS The Obama administration has kept up a frantic pace of 400,000 deportations a year, and is closing in on two million. Those numbers are driven by politics, not public safety. Immigration and Customs Enforcement has wide discretion to determine whom it detains and deports. It can retool all its policies to make noncriminals and minor offenders — the people most likely to benefit from the reform now stalled in Congress — the lowest priority for deportation.

The deportation surge is fed by programs like Secure Communities, which does immigration checks on everyone arrested by local and state law enforcement, and Operation Streamline, in which border crossers in the Southwest are prosecuted en masse, with little access to legal representation. Mr. Obama turned the dragnet on, and can turn it off. In marches and vigils across the country, protesters have made one plea on deportations to Mr. Obama: “Not one more.”