Tags: drum, freedomgiving, hunger strike, krome, torture
Comments: No
7 detainees from the #freedomgiving hunger strikes are still continuing on Day 21 of their hunger strike at Krome Detention Center in Miami, Florida. Yesterday they were summoned to court, where they appeared in wheelchairs and the judge issued forced feeding orders for all of them despite their protestations.
The hunger strikers also raised complaint about the prison and ICE officials having limited their phone access to the outside world of their family, friends, media, and even attorneys. The judge instructed that the detainees be allowed regular phone access. The judge also reminded that detainees should be allowed access and phone calls to the media.

END_OF_DOCUMENT_TOKEN_TO_BE_REPLACED 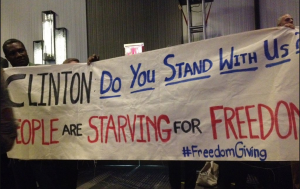 Started by 110 detainees and expanded to 150, 39 are continuing the strike at Krome, South Texas, and Aurora facilities at last count. END_OF_DOCUMENT_TOKEN_TO_BE_REPLACED

Tags: freedomgiving, hunger strike, torture
Comments: No
What: Protest to Free Detainees on International Human Rights Day, what will be Day 14 of Hunger Strike
Where: Immigration and Customs Enforcement Headquarters, 500 12th St. SW, Washington, DC
When: 11:30am, Thursday, December, 10th, 2015
Who: #Freedomgiving Hunger Strike Support Committee
The situation surrounding the #freedomgiving hunger strike that was started by more than 100 asylum-seekers in several detention centers reached grave proportions as an Alabama judge authorized forced feeding of at least one of the men and invasive medical procedures of others held at Etowah according to documents obtained by supporters.  Nearing two weeks without food, at least seven hunger strikers have been taken to the medical unit while strikers report authorities torturing them with sleep depriving cell visits every fifteen minutes for the past two days.

END_OF_DOCUMENT_TOKEN_TO_BE_REPLACED

In a rare occurrence, Sen. Bernie Sanders sat down publicly with undocumented immigrants to hear their concerns and discuss his Family First immigration platform.

During the discussion, a back and forth occurred between Jahed Ahmed, an asylum-seeker from Bangladesh who saw his friend killed in front of him because of their political involvement and who was part of hunger strikes that are facing increased retaliation as we speak. END_OF_DOCUMENT_TOKEN_TO_BE_REPLACED

END_OF_DOCUMENT_TOKEN_TO_BE_REPLACED


The day after protests prompted comment from all three democratic presidential candidates with Sanders and O’Malley issuing support, an ICE supervisor visited the 37 asylum-seekers who started the #freedomgiving hunger strike.  The meeting led to the detainees temporarily ending their strike under the agreement that anyone waiting for travel documents will be released within two weeks and ICE will honor its protocol, releasing all pending cases on parole. END_OF_DOCUMENT_TOKEN_TO_BE_REPLACED

Today three additional centers join what has become known as the #freedomgiving hunger strikes.  On the eve of Thanksgiving, 110+ men who came to the US seeking safety but instead have been held in detention for seven months to up to two years refused their meals and demanded their freedom at the Etowah, Theo Lacy, and Otay detention centers. END_OF_DOCUMENT_TOKEN_TO_BE_REPLACED 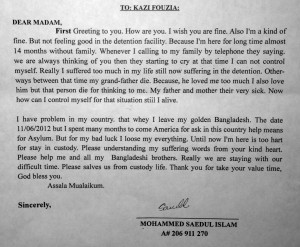 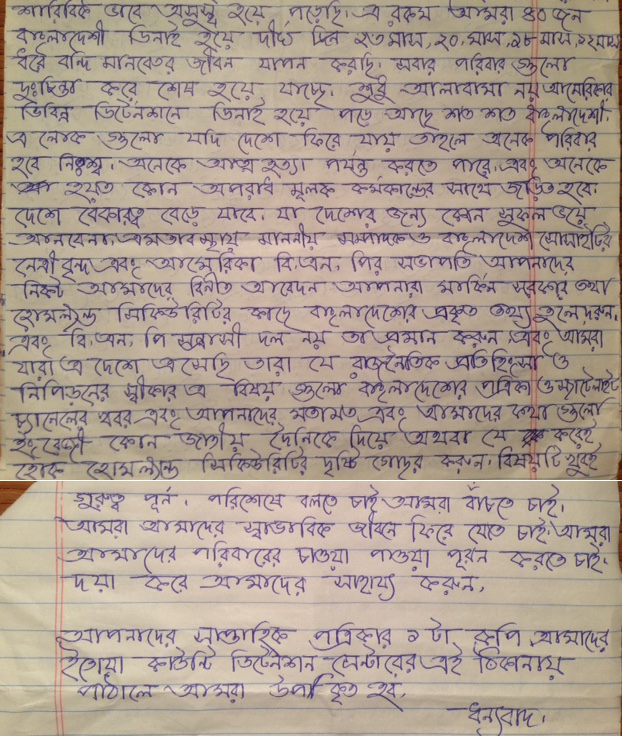 Tags: ernestina hernandez, hunger strike, joe corley detention center, melanny martinez, texas, white house hunger strike
Comments: No
What: Press Conference Supporting Federal Legislation to Address Hunger Striker Demands Where: Mickey Leland Federal Building, 1919 Smith Street, Houston, TX, 77002 When: 4:00pm, Tuesday, May 13, 2014 Who: Ernestina Hernandez, Melanny Martinez, Alianza Mexicana and supporters Manuel Martinez' family continues their fight to bring him back after he was forcefully deported for participating in a hunger strike at Joe Corley Detention Facility. Since his deportation, Manuel's wife and daughter have testified in Congressional briefings and participated in White House protests in Washington DC. They are holding ICE accountable for the abuse against Manuel and his fellow detained immigrants during the hunger strike, including verbal and physical violence, prolonged solitary confinement, and forced deportations. Read more
Older Entries
Search the Blog
Video: Accompany the Struggle to Say No More Deportations
Click to Stop their Deportations