Video: How Deportations Work in Illinois

Join the National Day of Action to Stop Deportations Here 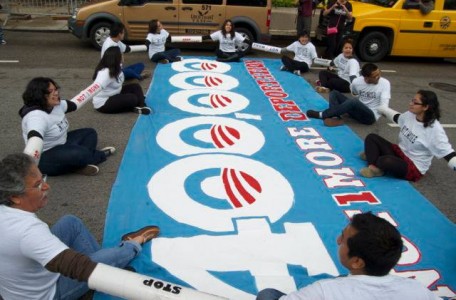 (05.29.2013) Chicago, IL – Seated around a banner with the number 400,000, the amount of people scheduled to be deported this year under White House quota, Chicagoans mounted a morning rush hour protest to call on President Obama to suspend deportations as Congress seeks reform.

“Plans and promises of immigration reform are not enough. While Congress is talking about passing immigration reform, I’m scared that my own parents will be one of the 1,100 who are deported every day,” explains undocumented protestor Stephanie Camba, 22. “The President can’t be a bystander in reform when he could stop our suffering and stop deportations with the stroke of a pen.”

Another protestor, Ireri Unzueta Carrasco, 26, a recipient of the President’s Deferred Action for Childhood Arrivals (DACA) said, “It doesn’t make sense to keep deporting people that could qualify for immigration reform. We want our families to still be here when a path to citizenship opens. We’re calling on the President to give our parents and everyone in our community the same relief he gave us.”

The protestors sat on Michigan Avenue circling a banner saying “400,000, Not 1 More Deportation” in front of the Hilton hotel, where the President is scheduled to speak at a fundraiser later in the day. An additional afternoon immigrant rights rally is planned for 4: 30pm across from the Hotel.

1. Sign the petition to the President calling for a suspension of deportations.
2. Call (202) 224-3121 and ask to speak to your Senator. When transferred, tell them that a key step to supporting immigration reform is getting the President to stop the deportations of those who could be included in it.

Sample Script: I’m calling to ask the Senator to send a letter asking the President to stop deportations as Congress seeks reform. It doesn’t make sense to keep deporting people today who could be offered the path to citizenship tomorrow. Each day that the debate in Congress continues another 1,100 people are deported. The President could end the suffering of those families and move immigration reform forward with the stroke of a pen and I’m asking for your office to go on record with that request.

Read about the 12 people arrested here 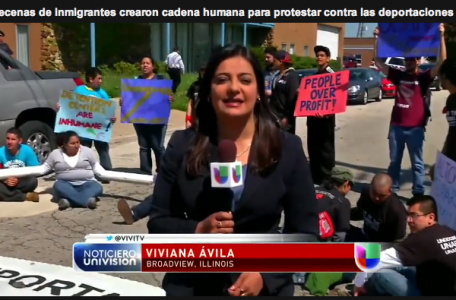