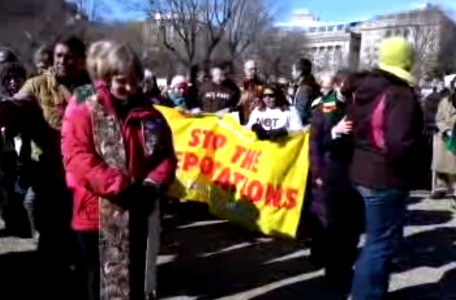 February 17, 2014 – Washington, DC: On Presidents Day, some two dozen religious leaders, immigrants and supporters are being arrested while praying in front of the White House. They gather to protest an inhumane deportation policy that could become President Obama’s historical legacy. The Obama Administration is about to reach an unprecedented 2 million deportations under its immigration quota programs. The action includes Pilar Molina whose husband is on hunger strike at a detention center in Norristown, Pennsylvania and Hermina Gallegos from Phoenix, Arizona where families and detainees are refusing to eat until their loved ones are released from extended detention. Read more
Search the Blog
Video: Accompany the Struggle to Say No More Deportations
Click to Stop their Deportations