Addressing Labor at the Democratic National Convention, Demanding a #MoratoriumNow 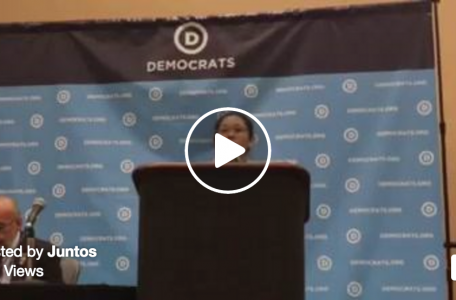 Below is the speech given at the labor caucus at the Democratic National Convention by Olivia Vazquez from Juntos.

My mother has worked in restaurants for 15 years. END_OF_DOCUMENT_TOKEN_TO_BE_REPLACED

Before it was an issue taken up by candidates, immigrant rights groups were already pushing the President to make immigration policy more humane. After the Supreme Court allowed the injunction on the deferred action deportation relief program to continue in US vs Texas, the national #Not1More campaign launched a petition that now has over 50,000 individual signatures calling on the President to act on immigration and issue a moratorium on deportations. END_OF_DOCUMENT_TOKEN_TO_BE_REPLACED

Tags: dhs, juntos, nutter, philadelphia
Comments: No
January 22, 2016 – Philadelphia, PA
Immigrant communities in Philadelphia and nationally reacted with outrage today as the Department of Homeland Security announced that former Mayor Nutter would be named to the DHS advisory committee.
“When Mayor Nutter betrayed our communities and his own policy, we knew it was more about his own future than about the well-being of the city of Philadelphia,” explainsErika Almiron, executive director of Juntos. “We can’t have people who say they represent us putting their career before the people. We hope in his new role he considers the community whose pressure made him a temporary hero instead of his career that left his legacy in disgrace.”

END_OF_DOCUMENT_TOKEN_TO_BE_REPLACED

“On his first day in office, newly elected Mayor Kenney reaffirmed that the City of Philadelphia is in fact the city of brotherly love. As ICE raids sew new levels of fear in our communities, Mayor Kenney is making sure local officials have nothing to do with it, ” explains Erika Almiron, director of Juntos. END_OF_DOCUMENT_TOKEN_TO_BE_REPLACED

Community Based Healing not Unconstitutional Rollbacks

Editor’s note: The following is a statement by the Philadelphia Family Unity Network (en Español aquí)

The recent killing of Kathryn Steinle in San Francisco by Francisco Sanchez is a terrible and senseless tragedy. The pain her family must be experiencing is unimaginable, and they should be afforded the respect and decency of mourning in their own chosen way. END_OF_DOCUMENT_TOKEN_TO_BE_REPLACED

December 11, 2013 – Philadelphia, PA
A group of undocumented Philadelphians and supporters have just blocked all the exits for deportation vehicles at the downtown Philadelphia ICE office, just as they prepared to transfer immigrant detainees.

The action comes on the Eve of the Feast of Our Lady of Guadalupe, as community members led a procession to ICE headquarters to speak out against President Obama’s deportation dragnet programs. Under a banner that read “Not One More Deportation,” Philadelphia residents are calling for an end to the collaboration between local police and immigration authorities called “Secure Communities” or “S-SCOMM.” Early in 2014, the Philadelphia City Council will be holding a hearing to review the chilling effect on immigrant communities and the negative impact on public safety caused by Immigration (ICE) Holds, one of the ways in which police and ICE collaborate under S-COMM. END_OF_DOCUMENT_TOKEN_TO_BE_REPLACED 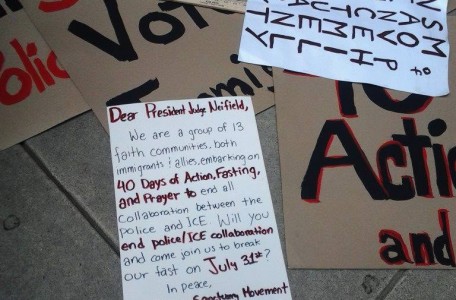 Americans traditionally treat Independence Day as an observance of the country’s hard-won freedom and liberties.

But activists point out that for undocumented immigrants in the U.S., there’s nothing to celebrate this Fourth of July.

Members of New Sanctuary Movement of Philadelphia, an interfaith immigrants rights coalition, will on Wednesday host an “un-barbecue” at the Liberty Bell, with empty grills, plates and picnic baskets symbolizing the lack of freedom faced by the city’s immigrants.

Seventy-five people representing 13 faith communities on June 22 kicked off a 40-day campaign of fasting and prayer, calling for an end to local deportation policies and for federal movement on humane immigration reform. 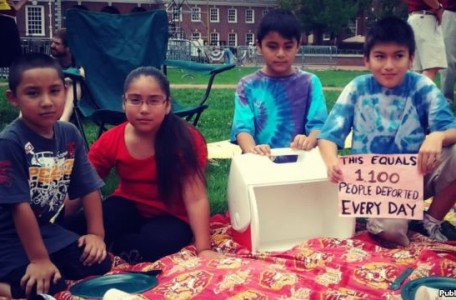 Barbecues and fireworks symbolic of America’s fight for freedom are a tradition of Independence Day celebrations in the United States. But this year, immigration activists in Philadelphia, Pennsylvania, the birthplace of America, are marking July 4 by fasting.

The interfaith immigrant rights group the New Sanctuary Movement staged a so-called “un-barbecue” on Wednesday, setting up empty plates, picnic baskets and grills around the iconic Liberty Bell to draw attention to the freedoms that aren’t shared with undocumented immigrants in the U.S.

“It’s no picnic for the immigrant community in this country. They’re still lacking that liberty and justice,” said Peter Pedemonti, director of the New Sanctuary Movement and one of dozens of activists fasting for 40 days in the name of immigration reform.

“People are being separated from their families every day,” he said, noting that 1,000 undocumented immigrants are deported daily from the U.S. “That’s certainly not the liberty and justice I think our forefathers imagined and that people throughout history have struggled and fought for.”

Since 2008, the City of Philadelphia has granted ICE access to its police database, allowing ICE officials to search for individuals by country of origin in order to target foreign-born individuals.

On June 22, over 65 immigrants, allies, and religious leaders and 13 faith communities in Philadelphia began “40 Days of Fasting, Action, and Prayer” to demand an end to the collaboration between the Philadelphia Police Department and Immigration and Customs Enforcement (ICE).

The fast, organized by the  New Sanctuary Movement of Philadelphia (NSM), seeks to pressure Philadelphia officials to end local policies that result in mass deportation. Even if federal comprehensive immigration reform is passed by Congress, millions will be excluded from achieving citizenship and local deportation programs will continue to separate families and endanger public safety. In addition to participating in Secure Communities, Philadelphia is unique in granting ICE direct and unprecedented access to the local police’s electronic database. END_OF_DOCUMENT_TOKEN_TO_BE_REPLACED