Manuel’s Case: So Much of What’s Wrong with ICE

Manuel Roman Gutierrez has lived in the U.S since he was 16 years old. Last November, two weeks after his youngest daughter was born, he was stopped by Milwaukee police, and although he was not cited or charged, he was turned over to Immigration and Customs Enforcement (ICE).

It has been one year since Manuel was detained, and since then ICE has aggressively pursued removal against him. At every step of his deportation process, Manuel and his attorney have presented evidence that show that he does not meet any of the priorities for deportation set by the Department of Homeland Security (DHS), demonstrating that Manuel is not a threat to public safety, and that his deportation would negatively and irreparably affect his family. END_OF_DOCUMENT_TOKEN_TO_BE_REPLACED

Policies for the Apprehens etention and

This memorandum reflects new policies for the apprehension, detention, and

removal of aliens in this country. This memorandum should be considered

Department–wide guidance, applicable to the activities of U.S. Immigration and Customs

and Immigration Services (USCIS). This memorandum should inform enforcement and

In general, our enforcement and removal policies should continue to prioritize

threats to national security, public safety, and border security. The intent of this new

policy is to provide clearer and more effective guidance in the pursuit of those priorities.

To promote public confidence in our enforcement activities, I am also directing herein

greater transparency in the annual reporting of our removal statistics, to include data that

tracks the priorities outlined below.

The Department of Homeland Security (DHS) and its immigration componentsCBP,

ICE, and USCIS-are responsible for enforcing the nation‘s immigration laws.

Due to limited resources, DHS and its Components cannot respond to all immigration

violations or remove all persons illegally in the United States. As is true of virtually

every other law enforcement agency, DHS must exercise prosecutorial discretion in the

enforcement of the law. And, in the exercise of that discretion, DHS can and should

develop smart enforcement priorities, and ensure that use of its limited resources is

devoted to the pursuit of those priorities. DHS’s enforcement priorities are, have been,

and will continue to be national security, border security, and public safety. DHS

personnel are directed to prioritize the use of enforcement personnel, detention space, and

In the immigration context, prosecutorial discretion should apply not only to the

decision to issue, serve, file, or cancel a Notice to Appear, but also to a broad range of

other discretionary enforcement decisions, including deciding: whom to stop, question,

and arrest; whom to detain or release; whether to settle, dismiss, appeal, or join in a

motion on a case; and whether to grant deferred action, parole, or a stay of removal

instead of pursuing removal in a case. While DHS may exercise prosecutorial discretion

at any stage of an enforcement proceeding, it is generally preferable to exercise such

Except as noted below, the following memoranda are hereby rescinded and

Exercising Prosecutorial Discretion Consistent with the Civil Enforcement Priorities of

the Agency for the Apprehension, Detention and Removal of Aliens, June 17, 2011; Peter

2011 ; Civil Immigration Enforcement: Guidance on the Use of Detainers in the Federal,

The following shall constitute the Department‘s civil immigration enforcement

Aliens described in this priority represent the highest priority to which

enforcement resources should be directed:

(a) aliens engaged in or suspected of terrorism or espionage, or who

an organized criminal gang to further the illegal activity of the gang;

jurisdiction, other than a state or local offense for which an essential

element was the alien’s immigration status; and

(e) aliens convicted of an “aggravated felony,” as that term is defined in

another form of relief under our laws, or unless, in the judgment of an ICE Field Office

Director, CBP Sector Chief or CBP Director of Field Operations, there are compelling

and exceptional factors that clearly indicate the alien is not a threat to national security,

border security, or public safety and should not therefore be an enforcement priority.

the second-highest priority for apprehension and removal. Resources should be dedicated

accordingly to the removal of the following:

(a) aliens convicted of three or more misdemeanor offenses, other than minor

was the alien‘s immigration status, provided the offenses arise out of

(b) aliens convicted of a “significant misdemeanor,” which for these purposes

is an offense of domestic violence; 1 sexual abuse or exploitation;

burglary; unlawful possession or use of a firearm; drug distribution or

trafficking; or driving under the influence; or if not an offense listed

above, one for which the individual was sentenced to time in custody of

90 days or more (the sentence must involve time to be served in custody,

and does not include a suspended sentence);

( c) aliens apprehended anywhere in the United States after unlawfully

satisfaction of an immigration officer that they have been physically

present in the United States continuously since January 1, 2014; and

( d) aliens who, in the judgment of an ICE Field Office Director, USCIS

relief under our laws or, unless, in the judgment of an ICE Field Office Director, CBP

Service Center Director, there are factors indicating the alien is not a threat to national

security, border security, or public safety, and should not therefore be an enforcement

Priority 1 or 2, represent the third and lowest priority for apprehension and removal.

Resources should be dedicated accordingly to aliens in this priority. Priority 3 aliens

under our laws or, unless, in the judgment of an immigration officer, the alien is not a

should not be an enforcement priority.

1 In evaluating whether the offense is a significant misdemeanor involving “domestic violence,” careful

consideration should be given to whether the convicted alien was also the victim of domestic violence; if so, this

B. Apprehension, Detention, and Removal of Other Aliens Unlawfully in the

apprehension, detention, or removal of aliens unlawfully in the United States who are not

identified as priorities herein. However, resources should be dedicated, to the greatest

degree possible, to the removal of aliens described in the priorities set forth above,

commensurate with the level of prioritization identified. Immigration officers and

attorneys may pursue removal of an alien not identified as a priority herein, provided, in

the judgment of an ICE Field Office Director, removing such an alien would serve an

As a general rule, DHS detention resources should be used to support the

law. Absent extraordinary circumstances or the requirement of mandatory detention,

to be suffering from serious physical or mental illness, who are disabled, elderly,

pregnant, or nursing, who demonstrate that they are primary caretakers of children

or an infirm person, or whose detention is otherwise not in the public interest. To

detain aliens in those categories who are not subject to mandatory detention, DHS

officers or special agents must obtain approval from the ICE Field Office Director.

If an alien falls within the above categories and is subject to mandatory detention,

Section A, above, requires DHS personnel to exercise discretion based on

individual circumstances. As noted above, aliens in Priority 1 must be prioritized for

removal unless they qualify for asylum or other form of relief under our laws, or unless,

in the judgment of an ICE Field Office Director, CBP Sector Chief, or CBP Director of

Field Operations, there are compelling and exceptional factors that clearly indicate the

alien is not a threat to national security, border security, or public safety and should not

therefore be an enforcement priority. Likewise, aliens in Priority 2 should be removed

unless they qualify for asylum or other forms of relief under our laws, or unless, in the

indicating the alien is not a threat to national security, border security, or public safety

and should not therefore be an enforcement priority. Similarly, aliens in Priority 3 should

laws or, unless, in the judgment of an immigration officer, the alien is not a threat to the

In making such judgments, DHS personnel should consider factors such as:

since the offense of conviction; length of time in the United States; military service;

family or community ties in the United States; status as a victim, witness or plaintiff in

civil or criminal proceedings; or compelling humanitarian factors such as poor health,

age, pregnancy, a young child, or a seriously ill relative. These factors are not intended

to be dispositive nor is this list intended to be exhaustive. Decisions should be based on

the totality of the circumstances.

The revised guidance shall be effective on January 5, 2015. Implementing training

and guidance will be provided to the workforce prior to the effective date. The revised

after the effective date, and aliens detained, in removal proceedings, or subject to removal

orders who have not been removed from the United States as of the effective date.

Nothing in this guidance is intended to modify USCIS Notice to Appear policies, which

remain in force and effect to the extent they are not inconsistent with this memorandum.

the capability to collect, maintain, and report to the Secretary data reflecting the numbers

of those apprehended, removed, returned, or otherwise repatriated by any component of

DHS and to report that data in accordance with the priorities set forth above. I direct

CBP, ICE, and USC IS to cooperate in this effort. I intend for this data to be part of the

package of data released by DHS to the public annually.

These guidelines and priorities are not intended to, do not, and may not be relied

upon to create any right or benefit, substantive or procedural, enforceable at law by any

party in any administrative, civil, or criminal matter. 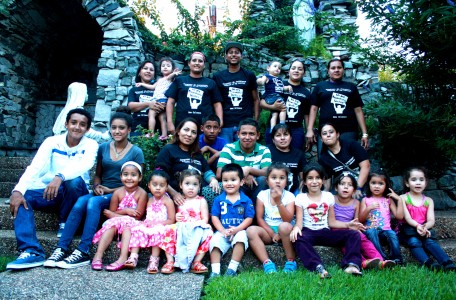 We, the undersigned write to urge that the Department of Homeland Security and the New Orleans Immigration and Customs Enforcement (ICE) Field Office take significant steps to exercise prosecutorial discretion in the detention and deportation of parents and legal guardians of children, especially those encountered collaterally during Department of Homeland Security investigations and operations in Louisiana.

On Friday, August 23, we welcomed the directive by Acting Director of ICE, John Sandweg, Facilitating Parental Interests in the Course of Civil Immigration Enforcement Activities. According to this directive, special consideration should be made in the placement, detention, and deportation of immigrants who are primary caretakers of minor children, regardless of the children’s immigration status. In addition, the prosecutorial discretion guidelines set by former ICE director John Morton in the June 17, 2011 memoranda Exercising Prosecutorial Discretion Consistent with Civil Immigration Enforcement Priorities of the Agency for the Apprehension, Detention, and Removal of Aliens and Prosecutorial Discretion: Certain Victims, Witnesses, and Plaintiffs set guidelines for exercising discretion for “low priority” removals taking into account the totality of the circumstances.  END_OF_DOCUMENT_TOKEN_TO_BE_REPLACED

What is Prosecutorial Discretion – A Pop Ed Guide 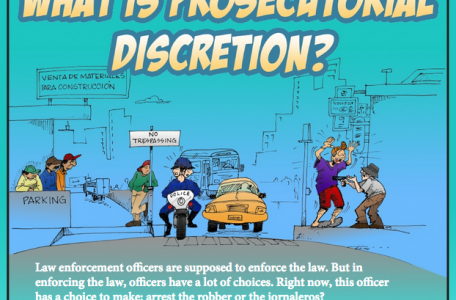